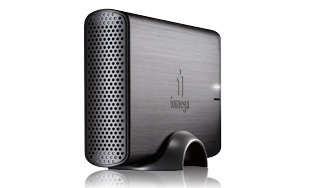 For a Small Cost Above an External Hard Drive and in Under Five Minutes, You are Streaming Digital Files Throughout Your Home

Iomega, an EMC company (NYSE: EMC) and a global leader in data protection, today announced the debut of the Iomega Home Media Network Hard Drive, a new standard in easy-to-use network storage for the digital home. With EMC’s acclaimed LifeLine™ software, in three simple steps users can configure up to one terabyte* of network storage for backing up all of their files as well as streaming music, photos, video and other multimedia files between computers, networked televisions, popular game consoles and other under-utilized digital home entertainment devices.

Iomega will be showing the new Home Media Network Hard Drive at the MacWorld tradeshow in San Francisco, January 6-9, 2009, and at the Consumer Electronics Show (CES) in Las Vegas, January 8-11, 2009.

“Iomega’s new Home Media Network Hard Drive is a powerful network storage device that’s so straightforward that even a novice can be backing up multiple computers and streaming media around their home in less than five minutes,” said Jonathan Huberman, president of Iomega and the Consumer and Small Business Products Division of EMC. “The Home Media Network Drive does the serious work of backing up and protecting digital files, but it also does the fun things like streaming photos and videos to game consoles, digital picture frames and networked TVs, as well as automatically feeding music into iTunes for easy playback – all for little more than the cost of a USB direct-attached desktop hard drive with comparable storage capacity.”

The Home Media Network Hard Drive supports iTunes™ and Universal Plug and Play (UPnP) and Digital Living Network Alliance™ (DLNA) certified devices, which makes the Home Media Network Drive a robust media server that can save, store and stream digital content not only to laptops and desktop computers but popular game consoles like the Xbox 360 and the PlayStation 3, as well as digital picture frames, networked TVs and any other compatible device on a home network.

Fast network performance is achieved through a Gigabit Ethernet connection that plugs directly into a router. The Home Media Network Hard Drive also boasts a fast processor so users can save and access large media files quickly, as well as a USB port to add a shared network printer for multiple computers, or an external USB drive for incremental storage capacity.

The Home Media Network Hard Drive is specifically designed to operate cool, thanks to an efficient fan that also adjusts its rotational speed automatically for quiet operation. The drive has a burnished gun metal exterior and a small footprint, making it aesthetically pleasing out in the open, yet small enough to be easily stowed away. Because the Home Media Network Drive is always turned on to serve up content, the product’s power supply is Energy Star compliant for power conservation and a better environment.

Backup Software and Online Storage, Too
The Home Media Network Hard Drive is a total network storage solution that provides data backup and protection with integrated award-winning EMC Retrospect Express backup software. During the set-up process, users choose files and folders for scheduled automatic backups from all the PCs and Macs on the network. After that, any changes or additions are updated and saved automatically.

About EMC
EMC Corporation (NYSE: EMC) is the world’s leading developer and provider of information infrastructure technology and solutions that enable organizations of all sizes to transform the way they compete and create value from their information. Information about EMC’s products and services can be found at www.EMC.com.

About Mozy
Mozy is the world’s most popular online backup service for consumers and small businesses with more than 900,000 customers, 25,000 business customers and 11 petabytes of information stored at its multiple data centers around the globe. Mozy was the first company to offer a fully featured free online backup service. Mozy was acquired by EMC Corporation in 2007, and information can be found at www.mozy.com.

About Iomega
Iomega Corporation, a wholly owned subsidiary of EMC Corporation headquartered in San Diego, is a worldwide leader in innovative storage and network security solutions for small businesses, home offices, consumers and others. The Company has sold more than 400 million digital storage drives and disks since its inception in 1980. Today, Iomega’s product portfolio includes industry leading network attached storage products, external hard drives, and our award-winning removable storage technology, the REV Backup Drive. To learn about all of Iomega’s digital storage products and managed services solutions, please go to the Web at www.iomega.com. Resellers can visit Iomega at www.iomega.com/ipartner.