InfoSonics Corporation (NASDAQ:IFON), one of the premier providers and distributors of wireless handsets and accessories serving Latin America and the United States, today announced that its proprietary verykool™ i500 and i230 wireless handsets have begun shipping to carriers in Central America. The clamshell i500 quad-band and the slim bar type i230 are feature-rich phones that include a 1.3 megapixel camera, Bluetooth, an MP3 player, external memory capacity, and more.

“The advanced, multimedia based i500 and i230 offer consumers a compelling cellular phone option in the Central American market where upgrade and replacement purchases are increasing,” said Joseph Ram, President and Chief Executive Officer of InfoSonics. “The i500 and i230 are the third and fourth product we have released in our verykool proprietary product line. We anticipate releasing three additional verykool phones in the remainder of this year. We believe the verykool phones will offer InfoSonics improved gross margins, as sales ramp-up in the back half of the year. In addition, the GSM multiple-band functionality makes these true world-phones, both beneficial for traveling customers, and providing InfoSonics the potential for future geographic expansion.” 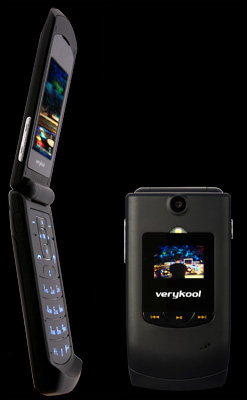 About verykool™
InfoSonics’ verykool™ proprietary line of mobile phones covers a full spectrum of product offerings, including entry level handsets, mid-tier feature phones and a Smartphone utilizing Microsoft’s Windows Mobile operating platform. The verykool phones are compact, stylish handsets, available in multiple fashion colors and include the most popular features demanded by younger consumers, such as, MP3 and multimedia players; megapixel cameras; PC Sync; expansion memory slots; and GSM tri-band or quad-band ‘world phone’ standards. In addition to its wireless handsets, InfoSonics’ offers a verykool fixed wireless phone providing connectivity and capacity for broadband that is unimpeded by the limitations of fiber or cable capacity in Latin America and other developing countries where traditional phone connectivity is greatly limited. InfoSonics is initially focused on selling its proprietary line of products to carrier customers in Latin America and the United States, and anticipates additional geographic expansion opportunities in the future from its fully featured, low priced, verykool family of wireless handsets. To view InfoSonics’ verykool line-up, please visit http://www.verykool.net

About InfoSonics Corporation
InfoSonics is one of the premier providers and distributors of wireless handsets and accessories in Latin America and the United States. For the wireless telecommunications industry, InfoSonics provides flexible and cost effective solutions, including product assembly, purchasing, marketing, selling, warehousing, order assembly, programming, packing, shipping, and delivery. InfoSonics supports manufacturers in moving their products to agents, resellers, distributors, independent dealers, retailers and wireless network operators in the U.S. and Latin America. For additional information, please visit http://www.infosonics.com.