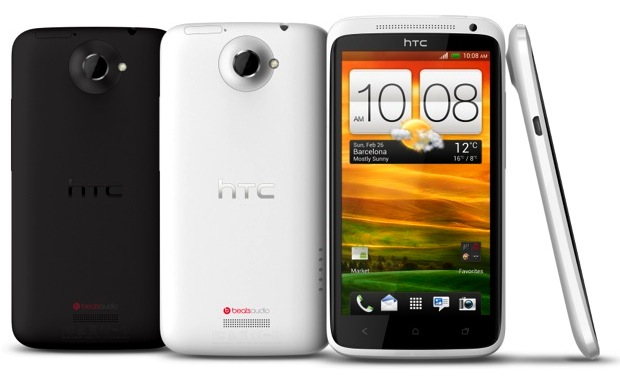 HTC announced the One X, their new flagship 4G LTE Smartphone running Android 4.0 with HTC Sense 4 and ImageSense, powered by the new NVIDIA Tegra 3 Mobile Processor. It includes a 1.5GHz Super 4-PLUS-1 quad-core with an integrated fifth Battery Saver Core and a high-performance 12-Core NVIDIA GPU.

HTC One X includes Beats Audio integration built into the hardware and software, offering rich, full sounds with professional-grade sound engineering to play the music how the artist intended. Beats Audio By Dr. Dre provides a distortion-free sound at higher volume and rich bass at all levels for video, gaming and music. HTC One X is custom tuned for the best audio performance when used with Beats By Dr. Dre accessories.

With built-in software on the HTC One X, customers can connect it to a computer and HTC's Sync Manager software that automatically installs to your computer and once connected, makes it easy to transfer songs, artists and playlists from a music library. The new HTC Music Hub is also customizable to include customers' favorite streaming radio services and music apps, making them easily accessible all in one location.

With ImageSense, HTC One X's 8-megapixel HD camera rivals traditional digital cameras with improvements to every part of the camera including the lens, sensor and software, while integrating the new HTC ImageChip. The combination reduces noise, removes color bias and enhances picture quality in photos and videos. More than just megapixels, its best-in-class f-2.0 lens with a backside illuminated sensor takes amazing pictures in low light and its quick launch feature makes sure you never miss an important moment.

It takes less than one second to launch the camera from the lock screen and the camera's autofocus locks in on your subject in under a second, to take nearly unlimited continuous shots simply by holding the shutter button. To ensure the best shot is captured, HTC ImageSense also introduces autoburst which will automatically take a burst of shots if the subject moves while you press the shutter button.

For those torn between whether a moment would be better captured via video or in photos, HTC One X includes Video Pic so you never have to choose again — the device can capture pictures while recording video in HD and has the ability to capture a still image from previously recorded video.

A high dynamic range (HDR) feature presents more contrast in captured photos and enables the camera to capture multiple photos from one instance, each with a different exposure level, layering the images together to create a single photo that combines the best parts of each for a more accurate range of light across the image.

The 1080p HD video camera automatically removes jitters and lets you lock the focus on a moving object. Slow motion video recording is also possible at a maximum of 108 frames per second. The device can be connected to any TV using HTC's wireless HDMI Media Link HD adapter to enjoy content on a larger screen.

Price and Availability
The HTC One X will be available exclusively from AT&T in the U.S. with pricing TBD. The phone will also be available in select 4G LTE markets with a LTE-enabled Qualcomm Snapdragon S4 processor with up to 1.5GHz dual-core CPU's.

Seidio Desktop Charging Cradle Kit for the HTC EVO 4G LTE, One X, or One S

Pocketables10 years ago
Advertisement. Scroll to continue reading.
You Are Here