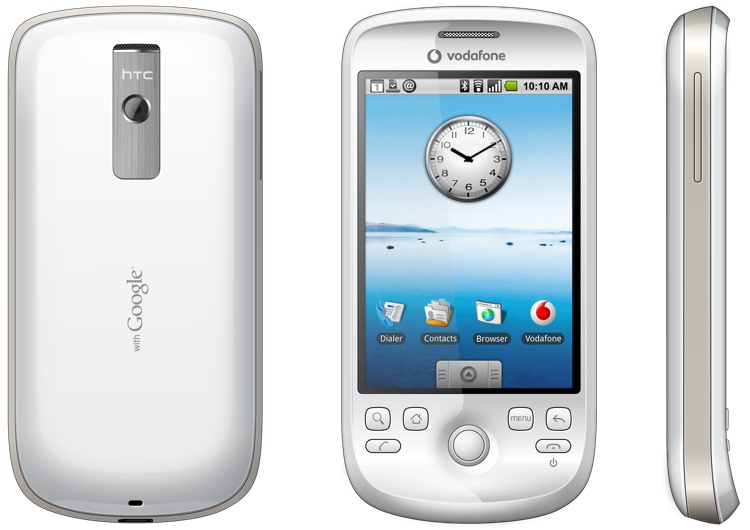 Vodafone and HTC Corporation today announced the HTC Magic smartphone, Vodafone’s first Android-powered mobile, which will be available in the spring.

The stylish new handset is exclusive to Vodafone in the UK, Spain, Germany and France (SFR) and available on a non-exclusive basis in Italy. Customers can ensure that they are the first to receive information about the HTC Magic’s availability, pricing and pre-ordering by registering their interest via their local Vodafone website from today.

The introduction of the HTC Magic is the result of a successful relationship between Vodafone and HTC, and Vodafone’s joining, late last year, of the Open Handset Alliance.

A tablet-style device, with a sleek design and unprecedented compactness for a smartphone featuring the Android platform, the HTC Magic enables a superior mobile internet experience, providing broad flexibility for personalisation via the application-rich Android Market. Available in white in the UK, Spain and France, black in Germany and in both colours in Italy, the HTC Magic will be for sale in several other Vodafone markets over the next few months.

“Delivering an unbeatable mobile internet experience for our customers is a priority for Vodafone, so we are very excited to be introducing our first Android-powered smartphone in the spring,” says Patrick Chomet, Global Director of Terminals, Vodafone Group. “Following our joining of the Open Handset Alliance, we have worked very closely with HTC to bring this cool new phone to the market. Our customers want to access a wide range of the most attractive mobile devices to help them make the most of their time – the HTC Magic helps meet that need.”

“The HTC Magic embodies the compact style and sophistication for which HTC has come to be known, with the powerful and intuitive internet experience for which the Android platform was designed,” says Peter Chou, president and CEO, HTC Corporation. “We are proud of our partnership with Vodafone and excited about making the Android-powered HTC Magic available to Vodafone customers in Europe.”

“The announcement of the HTC Magic is an important step for Android and the Open Handset Alliance,” says Andy Rubin, Senior Director of Mobile Platforms at Google. “With it, Vodafone is opening up the mobile web for consumers across Europe and giving more third-party developers a platform on which they can build the next wave of killer applications.”

Available from free on various price plans, the HTC Magic has a 3.2″ QVGA touch screen display and features a trackball and navigational buttons for quick, easy access. The HTC Magic includes a variety of email options such as Google Mail™, POP3 and IMAP as well as Google Talk™ for instant messaging.

The HTC Magic has a variety of powerful mobile internet capabilities beginning with an Android-optimised Webkit browser. It also features the popular Google applications, Google Maps™ and Google Search™ as well as favourites like YouTube™. In addition, Android Market allows for quick and easy downloading of games and applications utilising Vodafone’s fast and reliable network.

Full details of availability and pricing will be available in the future in local Vodafone markets.