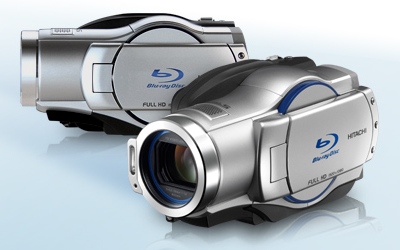 With today’s introduction of not just one, but two versions of the world’s first Blu-ray™ disc camcorder, Hitachi continues its long-standing tradition of being first to market with landscape-changing consumer electronics products.

The new DZ-BD70A is a single drive camcorder that can record approximately one hour of FullHD 1920×1080 high definition video on an 8cm single-sided Blu-ray disc (BD-R and BD-RE). Lifelike image reproduction and rich, immersive color are a result of Hitachi’s 5.3 mega pixel CMOS image sensor and HD quality 12-element lens system. Not only can the DZ-BD70A record high definition video to Blu-ray discs, it also comes with an SD™ card slot for storing digital still photos at 4.32 mega pixel max resolution. A unique Hitachi feature called Photo Capture allows users to search though recordings on a Blu-ray disc, grab any still frame of video and save it as a photo to the SD card slot in 2.1 mega pixel resolution. For even more recording flexibility the DZ-BD70A also allows video to be recorded in standard definition quality to DVD discs (DVD-R/-RW/-RAM).

Adding to the excitement for consumers will be the flagship DZ-BD7HA camcorder, a Hybrid model. This means it provides the Blu-ray disc recording capability along with a 30 gigabyte (GB) built-in Hard Disk Drive (HDD) that can record approximately four hours of 1920×1080 high definition video (HX mode) or up to eight hours of 1440×1080 high definition video (HS mode). Also, with the simple push of a button, it can copy the contents from HDD to BD within the camcorder itself, a major convenience feature for on-the-go consumers who can now bypass external devices (PCs, etc.) altogether to quickly dub a highlight reel. Easy editing functions such as split, delete and connect can also be made right in the camcorder before using the 1-touch dubbing function to burn Blu-ray disc copies.

“It was important for us to be the first to offer consumers the impressive benefits of Blu-ray disc technology. To be the first manufacturer to create two models of the world’s first Blu-ray disc camcorders that shoot, playback and store HD video is a huge milestone for us and something we are exceptionally proud of.” said Hitachi America product manager Jeff Fochtman. “Hitachi is well known for having introduced the world’s first DVD camcorder in 2000, and last year we introduced the world’s first Hybrid camcorder with a DVD drive and a Hard Disk Drive. These products have been hugely popular and award winning. Blu-ray Disc Camcorders certainly demonstrate our ability to innovate and consumers have a new premium format choice on the market because of these efforts.”

For a comprehensive presentation of the new Hitachi BD camcorders, visit:
http://av.hitachi.com/camcorder

Pricing and Availability
The Hitachi model DZBD70A Blu-ray camcorder will be offered at a Manufacturers Advertised Price (MAP) of $1,299. The DZBD7HA model Blu-ray Hybrid with built-in 30GB hard disk drive (HDD) is priced at a MAP of $1,499. Both camcorders will be available in North America in October 2007.