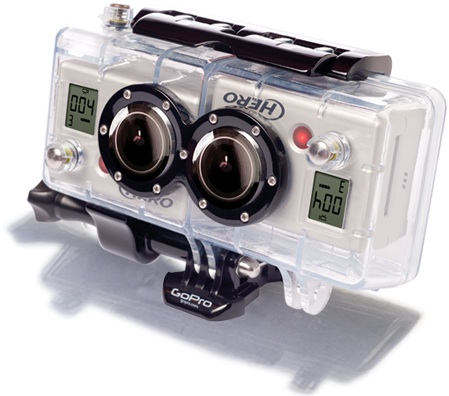 GoPro has introduced the 3D HERO System, a waterproof 3D expansion kit for GoPro's best selling 1080p HD HERO camera. The 3D HERO System has an industry-first modular design that enables consumers to combine two 1080p HD HERO cameras to form a single 1080p 3D camera, the world's smallest and least expensive one at that. Waterproof to 180 feet, the 3D HERO System can be worn on the body, mounted on gear and vehicles, and used as a handheld camera. A dual-camera, polycarbonate, waterproof housing holds the two cameras together and a synchronization cable plugs into the back of each camera, enabling them to function as a single camera. A single shutter button controls both cameras.

The 3D HERO System housing is only 5 inches (130mm) in length and 2.5 inches high (62mm) and is compatible with existing GoPro mounting accessories.

Announced on March 30, GoPro acquired CineForm, a leading video compression software company famous in the film and broadcast industry for their high quality compression and editing applications. GoPro's CineForm Studio software is a direct extension of CineForm's award winning professional applications and puts the power of Hollywood-caliber 2D and 3D editing in the hands of consumers.

Price and Availability
The 3D HERO System is available immediately at GoPro.com and is shipping to GoPro retailers worldwide for a price of $99.99. GoPro's 1080p HD HERO cameras are not included with the 3D HERO System and are sold separately, starting at $259.99 per camera.