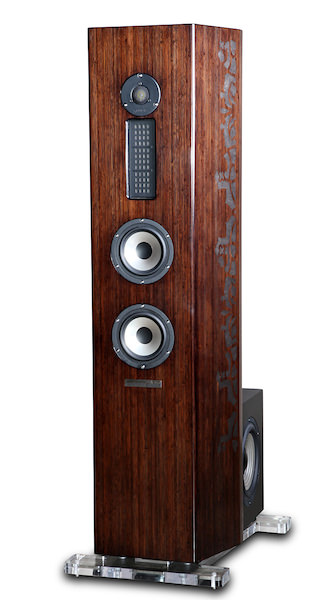 Unlike companies who launch a new ‘upgrade’ for all their models every two or three years, Genesis loudspeakers have a much longer life-span, and are kept regularly updated with new technologies and parts. For example, the improved Genesis Ring-Radiator Ribbon Tweeter (the Genesis R3T) is available as an upgrade to every Genesis loudspeaker ever built. Improved servo-bass amplifiers are also available for select models dating back to 1991.

The new Genesis 4 loudspeaker ($45,000 per pair) is very much more than just another upgrade or a line-filler product. It was the natural development of Genesis CEO and designer, Mr. Gary L. Koh’s work designing the Genesis Dragon, and his frequent interaction with the industry as well as customers and their families. The G4 reflects many of the new desires and lifestyles of the potential market. Unlike other ‘audiophile’ loudspeakers, it is not designed to be tuned specifically to the seated position of a single listener. It is designed to be shared with family and friends, while still retaining the qualities that an audiophile craves.

Hence, it is small and light so as not to overwhelm the living room. It will work in a party environment as someone standing between the speaker and the listener would not cast a large ‘sonic shadow’. As with all of Gary’s designs, it will play all music equally well from small jazz vocals to classical orchestras to rock to deep house.

“I am very excited with this new loudspeaker,” said Mr. Koh. “Doing half a dozen shows a year around the world gives me a chance to talk to a diverse group of people. Different people like different sounds. I like accuracy, but not everybody does. So, I’ve given them two new controls to work with – one that goes from soft to bright, and another that goes from tight to warm. It’ll drive the audiophiles crazy, but as my usual with all my designs, turn the knobs to point straight up, and that will be ‘flat’.”

All Genesis loudspeakers are designed to be tuned into the environment that the loudspeakers are placed in. In a brighter room with lots of hard reflecting surfaces, the tweeter can be dialed down. And in a room with a lot of large, stuffed sofas that absorb more bass, the bass gain can be boosted to compensate. The Genesis 4 takes this one step further by providing more tuning beyond room compensation to change the sound to cater to listener preferences.

“I like to call this new loudspeaker the G-Force,” said Mr. Koh. “It uses everything I’ve learned about vector forces and loudspeaker coupling/decoupling. Instead of taking the brute force approach of a heavy, massive cabinet, I’ve gone instead towards intelligently managing the forces. Learning from the carbon fiber Genesis Dragon, I’ve used a bamboo (it’s a grass, not a wood!) ply to achieve much of the same effect at lower cost. Every speaker is custom hand-built, and the CES 2014 prototype shows off our ability to customize the finish of the loudspeaker with a high-gloss stained finish and a damask pattern that my wife wanted for the living room.”