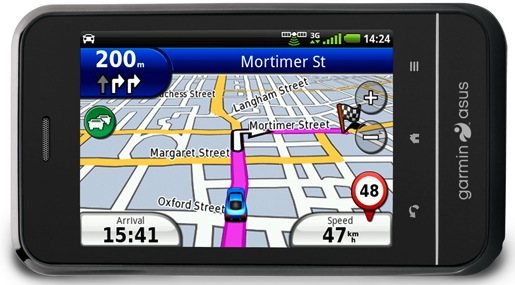 The Garmin-Asus A10, a touchscreen smartphone running on the Android™ platform that is optimized for pedestrian navigation, is expected to be available in mid-2010 in Europe and Asia-Pacific.

For those times when walking is the best way to go, the A10 is ideal for city navigation because of its bright, 3.2-inch HVGA touch screen, electronic compass and long-lasting 1500mAh battery. As with other Garmin-Asus Android-powered devices, the A10’s GPS capabilities are optimized to ensure that customers have the best location and navigation experience a smartphone can offer. Detailed maps are preloaded on the A10 so that users do not have to pay and wait for third party maps to download from a server, nor will they lose their turn-by-turn, voice-prompted navigation if they are out of cell phone coverage. In addition to pedestrian navigation, the A10 is ready for use in an automobile out-of-the-box, and it comes with a powered audio mount that magnifies the volume of the device’s voice commands.

The A10 is a full-featured smartphone on the Android platform that integrates Google™ Mobile Services with one-click access to Google Maps™, Gmail™, YouTube™, calendar, contacts and Android Market™, where users can find more than 30,000 applications to expand and personalize their phone to fit their lifestyle. Android applications that include location-centric content are also able to utilize the A10’s enhanced GPS capability.

Additional A10 smartphone features include a powerful WebKit browser with multi-touch, five mega-pixel camera including auto-focus capability that automatically geotags images with an exact location reference. The built-in accelerometer will quickly change the display so that screens may be viewed in portrait or landscape mode.

The A10 also supports optional cityXplorer™ maps, which makes it possible to plan and use routes that include public transit options such as bus, tramway, metro and suburban rail systems.

Tech210 years ago
Advertisement. Scroll to continue reading.
You Are Here