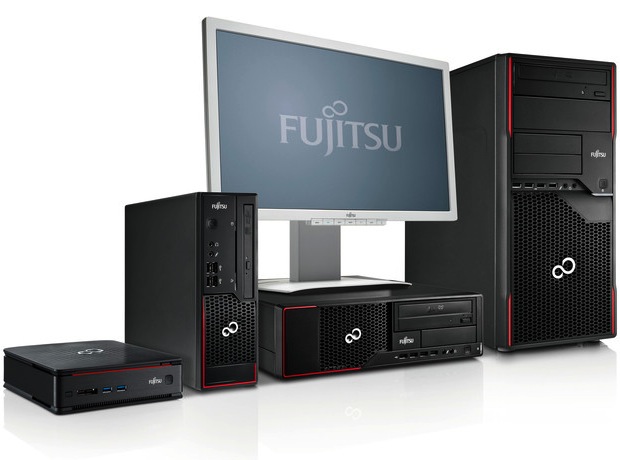 The new Fujitsu ESPRIMO E710 desktop and P710 microtower PC models are built from the same parts, including the mainboard, power supply, hard disk drive, optical drive and main memory modules. Fujitsu offers various configurations to suit different environments. One clever option is the FastOn feature, where the system boots from a cold start to login screen in just 13 seconds, meaning there is no need to leave an ESPRIMO PC running idle overnight just to avoid a lengthy start-up and login process. Network-based support is simple, since the ESPRIMO E710 and P710 ship with built-in Intel Standard Manageability.

The Fujitsu mini PC ESPRIMO Q910 uses standard desktop technology instead of mobile components. As well as taking up less desktop space than a standard PC and reducing cable clutter thanks to a built-in power supply, the ESPRIMO Q910 is highly energy-efficient. With optional low-voltage processors cutting Typical Energy Consumption (TEC) to just 31.3 kilowatt-hours (kWh) per year per system, the new mini PC is ideal for environments such as call centers, while seamless network integration and administration is assured thanks to Advanced Intel Desktop Manageability via Intel vPro technology.

As well as being small in size, the ESPRIMO Q910 features an eye-catching, Red Dot Award-winning design, and has excellent manners — as it is normally near silent in operation, thanks to the Zero Noise option. The advanced power and cooling design of Fujitsu means that system fans run only sparingly, helping reduce noise and heat output as well as saving lifetime energy costs.

Fujitsu is further cutting the total cost of ownership for desktop computing. Energy-efficient models are identical around the world — and Fujitsu takes this design philosophy further by applying this concept to two different-sized ESPRIMO desktop PC models.

For large organizations, managing global fleets of desktop PCs becomes incrementally more expensive and complex due to the presence of different makes, models, designs and form factors. As well as needing to support a wide and eclectic range of hardware and software drivers, short-term break-fix repair for faulty PCs is only possible if appropriate spares are held on-site.

Adopting a global standard for PCs enables enterprises to cut the total cost of ownership for their PC fleet. Essential spares can be stocked locally — allowing the reduction of unplanned downtime since the parts are guaranteed to fit all the PCs. Standardization also cuts the time required for system provisioning and maintenance — because of the reduced number of hardware drivers. See more Desktop PCs.