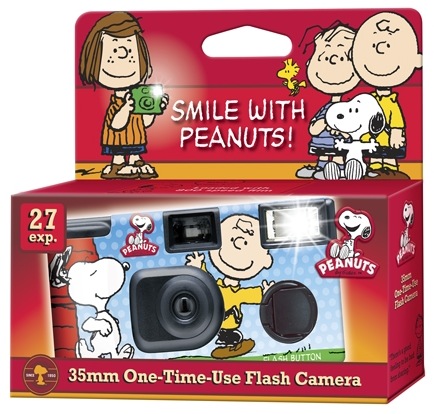 The Peanuts cartoon strip was created by Charles M. Schultz, and became nationally-syndicated in October 1950 in 7 newspapers. Today, the comic strip appears in more than 2,400 newspapers worldwide, and the characters appear on over 20,000 products.

“Peanuts is one of the most beloved comic strips and entertainment brands in the world,” said Rafi Haqqani, marketing director, Imaging Group, FUJIFILM U.S.A., Inc. “The tales of Charlie Brown and the rest of the Peanuts gang reach fans through a variety of media, and we are pleased to add One-Time-Use Cameras to the list.”

According to Haqqani, One-Time-Use Cameras with popular character themes are valuable additions to Fujifilm’s branded OTUC marketing strategy. Fujifilm’s One-Time-Use Cameras continue to provide consumers with a convenient and affordable way to capture all of life’s moments. In fact, a November 2007 study conducted by Fujifilm found that 58% of consumers purchased or used a One-Time-Use camera during the past year. In addition, the OTUC was seen as preferable to camera phones. The two main reasons cited for use were as back-up for digital cameras, in the event of full memory cards, dead batteries and forgotten cameras; and for use by children, for occasions such as school field trips, taking a camera to camp, and as a stocking stuffer.

The Peanuts Flash One-Time-Use Camera is preloaded with Fujicolor 800 speed film and features a powerful, quick flash system and a high-quality fixed-focus lens for clear, brilliant color pictures, indoors or out. One-Time-Use Cameras are the perfect solution for family outings and occasions, and are great for kids because they are easy to use and affordable.

The new Peanuts One-Time-Use Camera will be available for purchase in June 2008. For additional information, please visit: www.fujifilmusa.com.