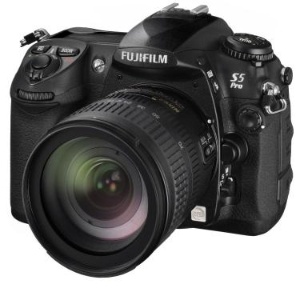 FUJIFILM U.S.A., Inc. today announced the full specifications, availability and retail price for the highly anticipated FinePix S5 Pro. Announced in development at Photokina 2006, the FinePix S5 Pro is scheduled for nationwide market availability February 2007 at a price of $1,999.

Confirming Fujifilm’s commitment to professional photographers, the FinePix S5 Pro carries a number of features that appeal to wedding, portrait and studio photographers. One is an expanded dynamic range from the double pixel technology (6.17 million S-pixels and 6.17 million R-pixels) of the camera’s Super CCD SR Pro sensor that is approximately 400% wider than that of a CCD working on a single-pixel design. In addition, the FinePix S5 Pro goes a step further by coupling the new Super CCD SR Pro sensor with Fujifilm’s new RP Processor Pro for smoother tonality from brightest light to the darkest shadows. An ISO equivalent sensitivity of 3200 is also available on the FinePix S5 Pro, thanks to the RP Processor Pro technology.

Additionally, the camera features Fujifilm’s Face Detection Technology. A post-capture function on the FinePix S5 Pro, the technology detects up to ten faces in a scene at the push of a button. Using the camera’s LCD monitor, FinePix S5 Pro users can zoom in to the faces of subjects, confirming focus, exposure and whether eyes are open or closed.

Additional highlighted features of the FinePix S5 Pro include: excellent ergonomics with weatherproof seals, a robust shutter mechanism tested to exceed 100,000 cycles, and advancements to the Film Simulation Mode with the addition of three new settings for varying skin tones.

About Fujifilm
Fujifilm brings continuous innovation and leading-edge products to a broad spectrum of industries including medical, life sciences, consumer electronic, chemical, graphic arts, information systems, photography and office products based on its vast portfolio of digital, optical, fine chemical and thin film coating technologies. The company provides products and services that contribute to the advancement of culture, science, technology and industry, as well as to improved health and environmental protection. It is the global leader in digital minilabs; Computed Radiography systems; ink dyes, pigments and UV inks for inkjet printers and materials used in the production of flat panel displays. It was ranked number 18 for U.S. patents granted in 2005, employs more than 75,000 people worldwide and in the year ended March 31, 2006, had global revenues of $22.8 billion.

* With Fujifilm’s commitment to constant improvement, the company reserves the right to alter specifications without prior notice.

(*1) The number of pixels on the image sensor which receive input light through the optical lens, and effectively reflected in the final output data of the still image.
(*2) Exif2.21 is a newly revised digital camera file format that contains a variety of shooting information for optimal printing.
(*3) When connecting the Video cable (included) to TV, the camera’s screen is turned off.
(*4) “CIPA DC-002-2003 Standard Procedure for Measuring Digital Still Camera Battery Consumption” (extract); Using included rechargeable Li-ion battery NP-150, AF50mm F1.4D lens, Compact Flash (CF) Card. Pictures shall be taken at a temperature of 23°C(73.4F) every 30 seconds, the flash used at full power every second shot and the camera turned off and then on again once every 10 shots.
(*5) HS-V3UP is an upgrade package for HS-S2 and HS-V2.