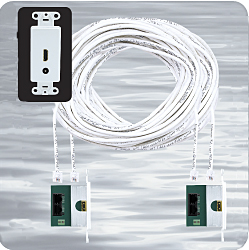 HDMI-CAT5D System by Ethereal Converts HDMI Signal to CAT5, Then Back to HDMI

Ethereal Home Theater’s HDMI-CAT5D System provides an efficient, economical solution to running HDMI signals over long distances by converting the HDMI cable to CAT5/6, then back into an HDMI cable at the display.

Because many homes are already wired with CAT5E or CAT6 cabling, Ethereal developed the system to send HDMI signals correctly down two unshielded CAT5/SE or CAT6 cables. The HDMI-CAT5D System consists of Tx (send) and Rx (receive) units, and two networking (RJ45) type connectors at each end for an easy-to-install and service interface. It accommodates CAT5 cable lengths up to 75 feet, CAT5E up to 100 feet, and CAT6 up to 200 feet.

The HDMI-CAT5D is built around Ethereal’s Leviton Decora-style wall plates, and is intended for in-wall installations in which appearance is as important as performance. It features Ethereal’s low-speed line driver and high-speed data digital restoration circuit. The HDMI-CAT5D has the HDMI diagnostic built into the back side of the units so as to not be visible when mounted above a projector or behind a flat panel display. Twisted pair balanced mode transmission design greatly suppresses radiated noise from high voltage (110V).

The HDMI-CAT5D is among the products in Ethereal’s exciting new DTW Series of advanced HDMI technology accessories. Designed by and for custom installers, the HDMI-CAT5D is manufactured in the United States.

Based in Holly Hill, FL, with offices in Long Beach, CA, Ethereal Home Theater is a wholly owned subsidiary of Metra Electronics Inc. (metraonline.com), a leader in the auto sound industry that is the parent company of such consumer and professional installation brands as Axxess, Monkey Video, Raptor, Silencer and Tsunami.