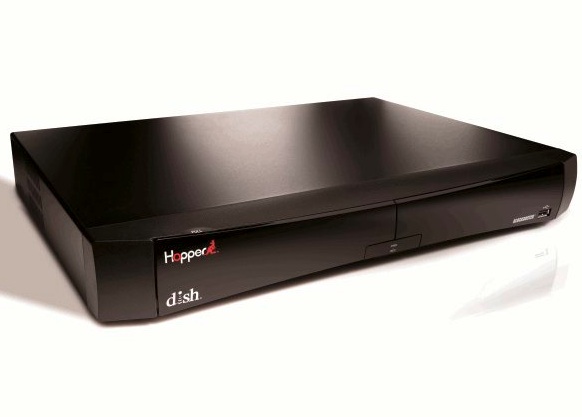 DISH Network announced a whole-home high definition DVR system that consists of the Hopper HD DVR that works with your main TV and Joey set-top boxes for any other TV in your house. With the system in place you get the same DVR functionality from any TV in your home, letting you pause, play and rewind both live and recorded HD programs in up to four rooms.

The Hopper’s new, unparalleled feature, PrimeTime Anytime allows customers, with one click, to record using a single tuner all of the primetime TV programming from ABC, CBS, FOX and NBC — the networks that deliver the most popular shows during primetime. Once activated by a customer, PrimeTime Anytime records network programming in high definition, where available, every night and stores them for eight days after they have aired. This creates an on-demand library of approximately 100 hours of primetime TV shows, and makes it easy to catch up on episodes from last night and last week’s airing.

The Hopper can record up to six TV shows at once (two live programs and four PrimeTime Anytime shows) while allowing viewers to watch up to four different recorded or on-demand shows in four rooms of the house, simultaneously. This gives a family a variety of options to control or view their recordings and to watch shows in any room from a single Hopper.

The Hopper’s on-demand capabilities give access to DISH’s Blockbuster @Home for $10 per month which is now enhanced with more than 10,000 total titles streaming to the TV.

The Hopper also offers on-demand content for customers with limited or no Internet access with a feature called DISH Unplugged. This feature delivers via satellite hundreds of the most popular movies and TV shows to the hard drive, including transactional and authenticated videos on demand. DISH Unplugged provides a high quality picture without buffering and makes available many of the same streaming movie choices offered by Blockbuster @Home, including premium movie access.

And for subscribers of DISH’s America’s Top 120 programming package or greater, the Hopper provides whole-home music distribution from 73 SiriusXM channels, including album art and a unique collapsible list of music channels located at the top of the channel guide at Channel 99, making it faster and easier for SiriusXM music fans to find their favorite music.

Additionally, the Hopper will features TV apps that give viewers real time access to Facebook, Twitter, Pandora and photo sharing, as well as games, news, weather, sports, and stock quotes.

TV Everywhere
Customers can manage the Hopper via the Internet at www.DishOnline.com or the DISH Remote Access app, providing the ability to control DVR recordings on their tablets, smartphones and computers. Connecting the Hopper with DISH’s Sling Adapter provides customers the ability to watch and control all live TV channels, PrimeTime Anytime programs and the DVR on their computer, tablet or smartphone wherever they go.

The Hopper and Joey are designed and engineered by EchoStar Corporation. The Hopper works by distributing HD signals through existing co-axial cable in the home using the Multimedia over Coax Alliance (MoCA) specification. The Hopper is powered by a Broadcom 750 MHz processor, the most powerful satellite TV processor available today delivering a fast and responsive on-screen guide and a graphical user interface that features channel logos to help search channels, movies or TV shows quickly. The advanced search platform also allows for navigation of programs across satellite TV, broadband and an optional external hard drive.

Price and Availability (Update)
The Hopper system is available as of March 19, 2012 from DISH Network for new and existing subscribers. It requires a whole-home DVR fee of $10 per month and $7 per month for each Joey.