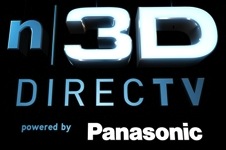 n3D powered by Panasonic, is now available at no additional cost to millions of DIRECTV HD customers on channel 103. Throughout the month of July, n3D customers will have access to exclusive, original 3D programming such as Guitar Center Sessions with Peter Gabriel and Jane's Addiction, as well as additional titles such as, Dinosaurs: Giants of Patagonia, Wild Safari: A South African Adventure and N Wave Picture's S.O.S Planet, African Adventure: Safari in the Okavango and Encounter in the Third Dimension.

n3D will also offer special events such as this weekend's running of the NASCAR Coke Zero 400, the local broadcast of the Yankees-Mariners series on July 10-11 and DIRECTV's exclusive, national broadcast of FOX Sports 2010 MLB All-Star Game in 3D on July 13.

“The ability to bring high-quality 3D programming into the home is a huge advancement in the evolution of television,” said Derek Chang, executive vice president of Content Strategy and Development for DIRECTV. “Our innovative technology has allowed us to lead the industry in HD and we are continuing on that same path by establishing ourselves as the premier destination for the best 3D viewing experience available. We are proud to be partnering with Panasonic and are excited to deliver this new dimension of television to millions of DIRECTV HD customers across the country.”

“This is a major milestone in the young history of 3D home entertainment and Panasonic is very proud to work with DIRECTV to bring consumers this new TV channel dedicated exclusively to 3D programming,” said Joseph M. Taylor, Chairman & CEO, Panasonic Corporation of North America. “We have launched our VIERA 3D TVs and Blu-ray 3D Player, and they have been very well received by consumers, but we know the key to the success of 3D for the home is the availability of content. The arrival of n3D powered by Panasonic underscores the fact that consumers will have access to a rapidly growing range of 3D TV programming including live major sports and entertainment events, as well as movies on 3D Blu-ray Disc in 2010.”

Panasonic is the exclusive presenting sponsor of DIRECTV's n3D channel. In January at the Consumer Electronics Show, DIRECTV and Panasonic announced their plans to launch 3D TV channels and have since worked together to leverage relationships with programming partners and movie studios to obtain new and existing 3D content.