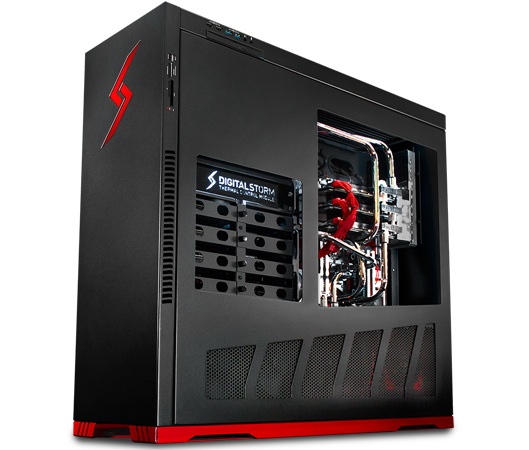 Digital Storm just introduced Aventum II, a no-compromise gaming PC, claiming to be the the world’s most advanced desktop performance PC. Crafted exclusively from steel and copper, Digital Storm did not use any plastic in the construction of Aventum II. The exotic nickel-plated copper piping solution was inspired by high-end automotive cooling systems and is handcrafted, ensuring no two Aventum II’s are identical. Combined with three huge 420mm radiators, the liquid cooling system is as efficient as it is beautiful and fully capable of unlocking the maximum performance potential of the Aventum II’s bleeding edge components.

Unlike many liquid cooled systems, that inefficiently cycle hot air from radiators straight into the heart of a PC, Aventum II employs a completely isolated exhaust chamber design. Hot air from the radiators is channelled under the power supply and out via a rear exhaust vent.

Other distinctive Aventum II features include a dedicated side intake fan for the graphics cards, the ability to support two power supplies and the inclusion of 8 hot swappable hard drive bays. A removable front panel allows for easy access to the front intake fans for maintenance.

Prior to shipping to the customer, each Digital Storm system undergoes a rigorous 72-Hour Stress-Test. Digital Storm technicians stress-test and benchmark the system via industry standard testing software coupled with a proprietary testing process that detects components which can be prone to future failure.

Price and Availability
Digital Storm’s Aventum II Gaming PC is available in configurations from $5,000 to $10,000 at http://www.digitalstormonline.com/aventum-ii.asp 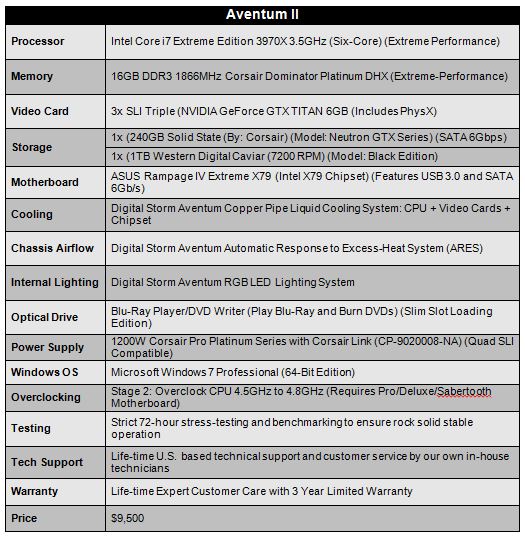