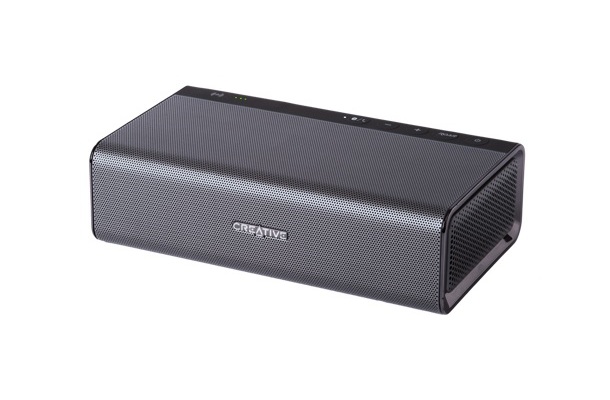 Creative will soon release a 5-driver portable wireless speaker called the Sound Blaster Roar (model SR20), also called the Audiophile Sound Booklet. The $200 Bluetooth speaker measures only 57 x 202 x 115 mm and weighs 1.1 kg. It combines wireless connectivity, portability, high fidelity and audio power all into one compact unit that can rest on the palm. In addition, the device functions as an external Sound Blaster sound card when plugged into a PC via USB.

Bi-Amplified Design
The Sound Blaster Roar features a bi-amplified design that utilizes two amplifiers — one dedicated to driving the lows and mids, and another dedicated to delivering the highs. This allows the speaker to produce uncompromisingly clear, high definition, well balanced music.

Space-Filling Dispersion
Another key differentiating factor is that the Sound Blaster Roar is specially designed to produce space-filling audio, instead of small, constrained audio. This is achieved by the incorporation of far-field high frequency front-firing drivers that project audio further than most other speakers in its class, allowing users to hear subtle audio details clearly even when at the other end of a room.

Audio spaciousness is further enhanced through the unique placement of the five different drivers. While the two high frequency drivers are front-firing, the active bass and mid-range driver is top-firing, with lower-range audio enhanced even further by the two side-firing passive radiators. This design results in a holosonic soundscape that enables improved width, height and depth while preserving stereo focus. The listener thereby experiences spacious audio that is not sweet spot-dependant.

Boxer-Bass-Module Design
Placing the top-firing bass and mid-range driver horizontally also allows for a low centre of gravity, which increases the stability of the Sound Blaster Roar. This eliminates any unnecessary movement, vibration or rattling of the speaker’s body during audio playback, even at high volumes.

Audio Power
By default, the Sound Blaster Roar is designed to deliver clear and balanced high fidelity audio, even at high volumes. In scenarios such as parties or gatherings where a wider audience needs to be addressed, pressing the ROAR button will instantly and significantly boosts the loudness, depth and spaciousness of the speaker audio for an even more powerful, kick-ass, no-holds-barred listening experience.

Integrated MicroSD WMA and MP3 player
The Sound Blaster Roar conveniently features an integrated MicroSD WMA and MP3 player that allows users to play audio directly from a MicroSD card, so users do not need to always commit their smartphone to play music. The player even allows users to skip music folders so that they can navigate to their songs faster without having to tediously cycle through all their individual tracks.
Speakerphone Teleconferencing
With its built-in high quality microphone providing for clear 360° voice pickup, the Sound Blaster Roar is able to take calls when connected to a smartphone via Bluetooth.
Integrated Voice Recorder
The Sound Blaster Roar’s Integrated Voice Recorder utilises the speaker’s built-in microphone, allowing for versatile one-touch recording of all kinds of audio – calls, external voices, or streamed music – directly to an insertable MicroSD card. The feature is ideal for recording voice memos, lectures, interviews, teleconferencing sessions, business/corporate meetings.
NFC-Enabled Bluetooth with Multipoint and HD Audio Codec Support
The speaker is able to connect wirelessly via Bluetooth, and utilizes the aptX and AAC codecs for the highest quality audio and lowest possible latency. The sound booklet also features the latest Near-Field Communication (NFC) technology, allowing users to quickly and easily connect to Bluetooth devices, requiring only a simple tap from an NFC-enabled smart device to the sound system to pair and establish a connection. Users can also connect two Bluetooth devices to the Sound Blaster Roar simultaneously.
Bedtime Mode
In Bedtime Mode, the Sound Blaster Roar gradually reduces its volume before automatically shutting down. The feature allows users to be gently and gradually lulled to sleep, and at the same time preserves the speaker’s battery by turning it off after a predetermined time, instead of having it switched on for the whole night. Parents of young children would also appreciate the feature – they can record themselves reading out a bedtime story, and play the recording back to their children as they are falling asleep.Life-Saver Mode
Life-Saver Mode allows the Sound Blaster Roar to play random tones and sound bytes at random, unpredictable intervals to keep users alert.

USB Audio With Sound Blaster Enhancement
Users can connect it to their PCs or Macs via USB to enjoy clear digital audio for their desktops or laptops. Connecting the speaker via USB enables advanced PC audio processing via the downloadable software, Sound Blaster Control Panel, and full access to the SBX Pro Studio suite of technologies that intelligently enhance audio in real time.

Dual Purpose Battery
The Sound Blaster Roar also features a Dual Purpose Battery. The large, built-in 6000 mAh Lithium-Ion rechargeable battery can be used to charge smartphones and tablets, beyond providing up to 8 hours of audio playback.

Built-in Siren
The Sound Blaster Roar comes with a built-in one-touch siren that lets users instantly grab attention, for example, during emergencies and at campsites.