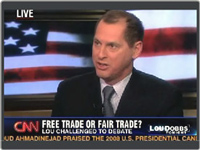 Pointing out that Dobbs often slants and fragments the facts on free trade, Shapiro established that trade supports jobs and economic growth by opening previously closed-off overseas markets. For instance:

CEA is calling on Congress to approve pending free trade agreements with Colombia, Panama and South Korea. “What these agreements do, Lou, is the agreements allow us to get into other countries, that’s why it baffles me that you oppose them,” added Shapiro.

“Free trade is good for the country,” Shapiro told Dobbs. “And as much as you say you are a free trader, you don’t want free trade agreements, you oppose them every chance you get, and that’s not good for this country, Lou.”

Dobbs responded by saying that our trade deficit is growing out of control. Shapiro pointed out that oil imports contribute to that deficit and that our exports are going up. “Your answer is to put up a wall around the United States and that would help us how?”

Dobbs claimed he doesn’t want to put up a wall around the United States but instead insists on an equal trade balance with our principal trade partners. “You have an Economics degree from Harvard and you know that’s unprecedented and undoable and unlikely and would hurt the people of this country. Give me an example of when a protectionist policy like that has ever been successful,” requested Shapiro.

In its trade campaign, CEA has called on Congress to pursue a pro-growth trade policy that includes:

For more information on the CEA trade initiative, please go to the CEA website at http://www.ce.org/freetrade.

About CEA:
The Consumer Electronics Association (CEA) is the preeminent trade association promoting growth in the $161 billion U.S. consumer electronics industry. More than 2,200 companies enjoy the benefits of CEA membership, including legislative advocacy, market research, technical training and education, industry promotion and the fostering of business and strategic relationships. CEA also sponsors and manages the International CES – Where Entertainment, Technology and Business Converge. All profits from CES are reinvested into CEA’s industry services. Find CEA online at http://www.CE.org.