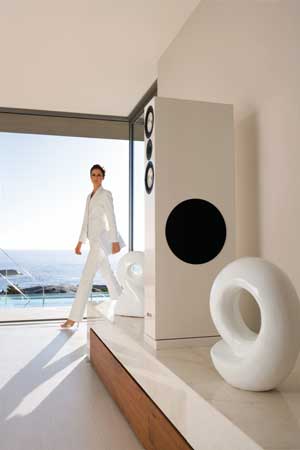 “The Karat is a modern blending of performance and style,” said Paul Madsen, president of Canton USA. “Designed with the same attention to performance as our other high-end lines, these are the perfect speakers for bold, modern decors. The narrow front baffle and deep side panels allow for the use of a large woofer for deep bass performance while maintaining precise imaging in the upper registers to minimize diffraction effects. In keeping with Canton’s evolutionary approach to design, where each generation builds on the last, this new lineup incorporates a number of subtle refinements for improved performance, but still maintains the essential sonic and aesthetic character that has made the Karat series one of our most popular lines.”

While the new models are built on the same basic platforms as their predecessors, Canton’s engineers have incorporated subtle but significant improvements to the transducers, crossovers, and internal cabinet details. Most significant among these is a refinement in the integration between the tweeter and midrange drivers accomplished through improvements in the aluminum diaphragm, soft rubber surround, and associated crossover circuits of the midrange drivers used throughout the line. The result is improved dispersion characteristics and lower distortion levels. Additionally, the midrange drivers benefit from new basket materials and geometry that results in reduced compression effects due to airflow restrictions for improved cooling and power handling capabilities.

The three Karat floor-standing models each benefit from a sophisticated 3-1/2-way crossover network, where both midrange drivers operate below 400 Hz, but only the upper driver also reproduces the upper midrange frequencies. This allows for substantial improvement in mid-bass performance without introducing the adverse interactions that occur when multiple drivers are used in the upper midrange registers.

The technical prowess of the Karat begins with its Canton-designed and manufactured drivers. All of the line’s full-range models employ a custom-tailored version of the company’s lauded 1-inch aluminum-manganese tweeter, which delivers extraordinary precision and dispersion characteristics while avoiding the harsh characteristics that plague many lesser-developed metal domes. The unique dome/voice coil former are made from a single piece, providing an extremely efficient heat sink for high-excursion modes, and the subtly flared transmission baffle improves the off-axis response that is vital to real-world listening environments.

All of the midrange and bass drivers in the Karat family have Canton’s exclusive Wave Surrounds, which employ a sinusoidal profile rather than conventional rounded surrounds. This provides substantial improvements in excursion and linearity for improved power handling and reduced distortion.

The Karat line’s midrange drivers are all constructed of aluminum for extreme rigidity and light weight, making the speakers extremely responsive to midrange and mid-bass transients. The Karat AS750 SC powered subwoofer also features an aluminum cone, the largest the company manufactures at 12-inches. The bass cones used in the large floor-standing models are constructed of sturdy Cellulose Graphite, and provide authoritative deep bass response precisely tuned to each cabinet’s internal volume. For the compact three-way Karat 730 DC, the side-mounted bass driver is constructed of lightweight polypropylene to allow for the increased demands of the smaller cabinet.

The Karat line enclosures are constructed from extensively braced and damped low-resonance MDF, and feature stylishly slim front baffles, thanks in part to the side-mounted woofers used in the three-way models. This design maintains extremely responsive and linear bass performance, while improving focus and imaging in the midrange and tweeter bands thanks to the reduction in adverse baffle interactions.

All models are currently available in graphite or silver lacquer finish, and select models in an optional high-gloss white- or black lacquer at a 15% surcharge. All models have black grilles. Prices range from $2,400 per speaker for the top-of-the-line Karat 795 DC, to $600 each for the two-way Karat 720.