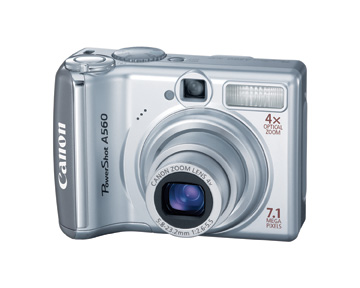 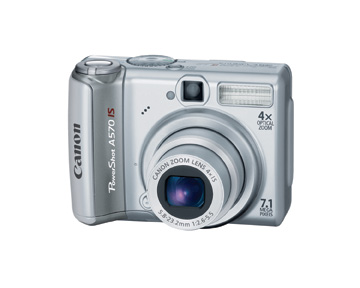 Advanced Technology, Canon Premium Quality and Renowned Reliability Make These Compact Digital Cameras Easy To Use, Easy To Afford and Easy To Love

With the introduction of the PowerShot A570 IS and A560 digital cameras, Canon’s A-Series cameras have once again come to the rescue of consumers just joining the digital photo revolution, as well as those who are already in the photo-fray, and are waiting for top-tier technology to trickle down before they trade-up.

Although the line’s “A” designation stands for the convenient AA batteries it accepts, it could easily stand for “affordable” or simply reflect the consistently high marks that these feature-packed PowerShot digital cameras earn from camera users and digital camera advocates alike. These two newest A-Series digital cameras continue to deliver on Canon’s long-standing commitment to produce the highest quality cameras at the highest possible value to consumers. Indeed, Canon’s A-series of cameras have long been heralded as a top-featured, entry-level line of digital cameras and rewarded with considerable consumer loyalty1.

“As Canon leads the way in digital camera design, innovation and image excellence, we are also seeking ways to put the power of those imaging advances into the hands of digital camera users everywhere,” states Yuichi Ishizuka, senior vice president and general manager of the Consumer Imaging Group at Canon U.S.A., Inc. “We are very proud that our new PowerShot A570 IS and PowerShot A560 digital cameras continue to fulfill that commitment and deliver on the promise of high quality and affordability.”

Sophistication Made Simple
Both the PowerShot A570 IS and the PowerShot A560 digital cameras are built with the kind of intuitive engineering that makes taking great pictures as simple as pointing and shooting. From the cameras’ Face Detection technology that detects multiple human faces in a scene and the new Red-eye Correction feature that greatly reduces that cursed condition that can occur with flash photography, to the on-board Intelligent Orientation Sensor that automatically detects whether the camera is being held and shot vertically or horizontally, these Canon cameras give users the freedom to shoot and share their photos with incomparable ease. The new models also feature a large and bright 2.5-inch 115,000 pixel LCD color display, making it easier to review captured images, perform on-camera editing and read and select menu options.

With Canon’s new Face Detection AF/AE/FE technology, the camera can detect, lock on and track multiple human faces in a scene simply by pressing the shutter button halfway. The face detection algorithm automatically prioritizes and selects faces and not simply the closest object. It will then optimize the focus, exposure, and flash to help ensure the best possible results. Working in concert with Face Detection, the “Red-eye Correction” feature helps to detect and correct red-eye during playback mode. Images can be corrected manually while viewing photos on the LCD screen. Canon’s new Face Detection Technology makes for even easier picture taking moments, helping users to ensure in-focus smiles, and assist in the elimination of overexposed faces.

In addition, the DIGIC III image processor has a more aggressive noise reduction algorithm enabling PowerShot A-Series owners to shoot at ISO equivalent speed ratings from 80 to a super high 1600 for increased low light photo flexibility. This sensitivity at the top-end allows the camera to utilize faster shutter speeds, significantly reducing the effects of camera shake and subject movement during hand-held or low-light photography. 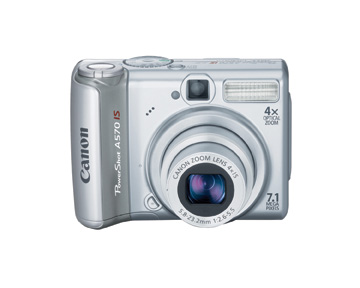 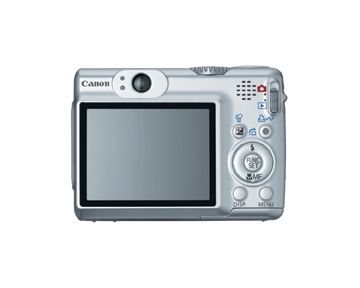 The PowerShot A570 IS Digital Camera
The 7.1 megapixel PowerShot A570 IS digital camera takes its place as the new “A-team” value champ with its impressive 4x (35mm-140mm equivalent) zoom lens and Canon’s advanced Optical Image Stabilization (OIS) that significantly reduces the effects of camera shake (and the ruined pictures they cause). Not just an electronic “optical illusion” that can diminish image quality in the cause of modest image stability, Canon’s “lens shift” optical system actually allows the lens to physically compensate for camera movement, even when that movement is caused by extended telephoto or low-light shooting conditions. The PowerShot A570 IS Digital Camera’s OIS is firmly rooted in the technological advances made by Canon in the design and construction of its professional EOS SLR and professional video lenses.

Adding to the camera’s optical excellence is its fast lens (opening up to f/2.6 at wide-angle settings and f/5.5 at telephoto settings). The PowerShot A570 IS digital camera’s great range of functions can be enhanced and expanded with any one of three optional converter lenses — a tele-converter, a wide converter or a close-up lens for macro photography — that attach to the camera’s zoom with the addition of an optional conversion lens adapter. The PowerShot A570 IS digital camera accommodates MultiMedia MMC memory cards as well as standard SD memory cards and the new, high capacity SDHC memory cards.

Fitting firmly and comfortably into a user’s hand, the PowerShot A570 IS digital camera continues the line’s characteristic grip design and easy-to-use intuitive interface with the added accent of a new champagne color grip. 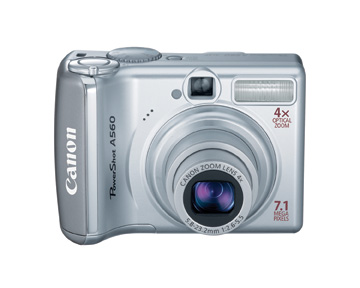 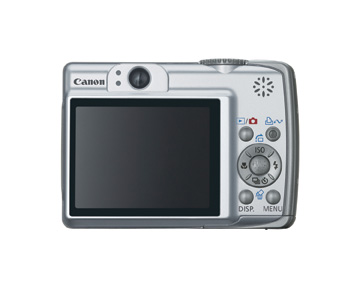 Direct Print
Like all PowerShot digital cameras, these newest additions to the A-series work seamlessly with Canon’s petite compact photo printers to deliver stunning high quality borderless prints. Consumers simply connect their PowerShot digital camera to a Canon compact photo printer-such as the SELPHY CP730 or PIXMA mini260 models. Press the bright blue Print/Share button, and within moments2, a brilliant, borderless 4×6-inch print begins to emerge. It is that simple. Canon’s compact Photo Printers are PictBridge compatible, so they work with PictBridge enabled digital cameras to provide users with excellent image quality and ease-of-use, especially when paired with a Canon digital camera.

Windows Vista Ready
As one of Microsoft’s Premier Launch Partners, Canon is proud to announce that all PowerShot cameras announced in 2007 are Certified for Windows Vista according to Microsoft standards, without any extra downloads or upgrades. Additionally, all current models are fully compatible with other operating systems including Windows XP and Mac OS X (Versions 10.2 – 10.4).

About Canon U.S.A., Inc.
Canon U.S.A., Inc. delivers consumer, business-to-business, and industrial imaging solutions. The company is listed as one of Fortune’s Most Admired Companies in America and is on the BusinessWeek list of “Top 100 Brands.” Its parent company, Canon Inc. (NYSE:CAJ), is a top patent holder of technology, ranking third overall in the U.S. in 2006**, with global revenues of $34.9 billion. For more information, visit www.usa.canon.com.