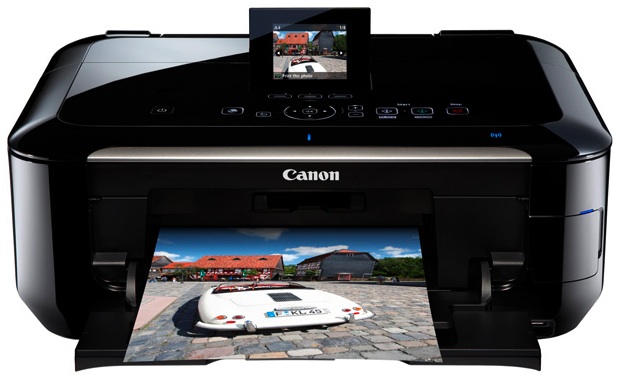 Canon PIXMA MG6220 All-in-One can print, copy and scan images and documents and is compatible with many of the popular wireless devices on the market today for easy printing from almost anywhere. Additionally, consumers can unlock their creative printing side with the significant software upgrades to Easy-PhotoPrint EX and Full HD Movie Print.

Canon designed the PIXMA MG6220 Wireless Photo AIO printers to print from nearly any screen whether on a cell phone, tablet, laptop or desktop computer. The Canon Easy-PhotoPrint mobile app, for use with compatible Android and Apple smartphones and tablets, has also been upgraded allowing users to print pdfs directly from compatible wireless devices. Furthermore, users can scan documents on the printer to be sent directly to a compatible wireless device.

With the newly developed Canon PIXMA Cloud Link, printing images and documents is easier than ever. Exclusive to these two PIXMA printer models, is the ability to print select Google Docs and Gmail attachments from any accessible device, further adding to their wireless versatility. For registered users of CANON iMAGE GATEWAY or Picasa Web Albums, users can wirelessly access their photo albums directly through the printers without the use of a computer and all users will have access to exclusive printing templates including stationery, envelopes, memos, calendars and many others.

The printer is 802.11n Wi-Fi certified allowing for a faster network transfer rate. Wireless networks can be set up with the press of one button when using a Wi-Fi Protected Setup (WPS). In addition, Canon offers its award-winning service and support online for all users looking to set up any of the new Wi-Fi products at, www.usa.canon.com/wirelesshelp. Here, customers have access to manuals and video tutorials to assist in setting up a Wi-Fi device.

With Canon's ChromaLife 100+ ink system, the PIXMA MG6220 Wireless utilize six individual ink tanks to produce superb results in both color and black and white. The inclusion of the gray and photo black ink provides the photo enthusiast with the opportunity for a black and white photograph to be printed with high accuracy.

Easy-PhotoPrint EX has been upgraded to help spark creativity when customizing and personalizing memorable images with new Fun-Filter Effects such as Fish-Eye, Miniature and Toy Camera. In addition, there is an option to change the focus of the image to have it appear softer and blur specific aspects of the background, similar to an effect which was previously only capable when using an SLR camera. These printers can also print directly on CDs, DVDs and Blu-ray discs for further personalization of media while creating fun photo projects at the same time.

Full HD Movie Print software has been enhanced as well to produce clearer images of frames from videos captured on compatible HD Canon EOS and PowerShot Digital Cameras. Users can easily tell the story of videos from memorable events, frame by frame in a more unique way than before by merging multiple images into one final shot, capturing nearly every portion of the action. There is a new layout feature as well for printing up to 72 individual images on one sheet of paper.

The Intelligent Touch System helps improve not only ease-of-use but productivity. With back-lit touch sensitive buttons, the light-guidance system eliminates buttons not in use to help reduce opportunities for mistakes. The responsive capacitive touch technology, which picks up on electricity in the users' body when a finger glides across the touch surface, is designed to provide seamless navigation through menus and other desired commands.