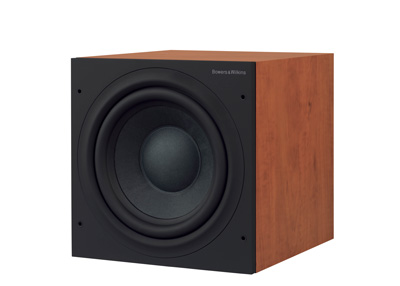 N. Reading, MA–The affordable 600 Series from Bowers & Wilkins, British maker of widely admired high-performance loudspeakers, has been an unqualified success since its introduction among customers and critics alike. Now the popular 600 Series family adds a new subwoofer, the ASW 610XP, that delivers reference performance from an amazingly compact, high-value design.

The new ASW 610XP utilizes a single 10-inch driver in a carefully calculated sealed enclosure, with substantial power, to surprising results: flat response to 25 Hz (-3 dB) with useful bass extension to 18 Hz (-6 dB), and impressively powerful and dynamic output potential. One secret to this remarkable performance is the ASW 610XP’s unique driver, a very long-throw “ten” with dual, high-current voice-coils and extremely strong, paper/Kevlar cone. Another is its “extra powerful” amplifier, a very efficient, audiophile-grade Class D design that delivers a true 500 watts to the sub’s operating band.

Available: Immediately, at a manufacturer’s suggested price of $1,200 each.