Quattro 4.5 HD  (pictured above)
The Quattro 4.5 HD features a stunning aluminum and glass unibody resulting in an exceptional build quality and luxurious design. Photos and videos come to life with spectacular clarity and rich, natural color on the vivid Advanced Super View 4.5-inch HD 326ppi display, resulting in unparalleled viewing angles and contrast ratio, all protected with marvelously curved scratch resistant Corning Gorilla Glass. Additionally, the Quattro 4.5 HD delivers excellent image capture quality even in adverse conditions such as low light, no light with an 8 megapixel camera featuring an f/2.4 large aperture lens, plus HD video recording up to 1080p, along with 16GB internal memory and 1GB RAM. The Quattro 4.5 HD will be available the first week of February 2013 at $349.99 unlocked through various websites in the US. 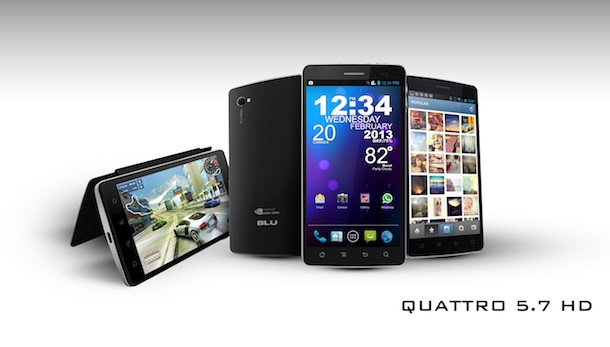 Quattro 5.7 HD
The Quattro 5.7 HD combines the functionality of a tablet with smartphone portability, highlighted by the captivating 5.7 inch, 1280 x 720 HD display, an 8 megapixel camera, plus HD video recording up to 1080p, along with 4GB internal memory, expandable to 32GB with external memory card, and 1GB RAM. The Quattro 5.7 HD will be available at the end of March 2013 at $299.99 unlocked through various websites in the US.

Quattro 4.5
The Quattro 4.5 features the most affordable price point in the industry today for flagship quad-core smartphone performance. The Quattro 4.5 includes a 4.5-inch qHD display, 5.0 megapixel autofocus camera, HD video recording up to 1080p, along with 4GB internal memory, expandable up to 32GB with an external memory card, and 1GB RAM. The Quattro 4.5 will be available the first week of February 2013 at $249.99 unlocked through various websites in the US.