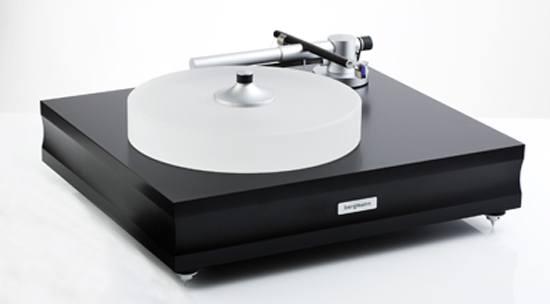 The Sindre is a high-end, airbearing turntable with a linear tracking airbearing tonearm built using as few parts as possible in a simple, timeless design, in keeping with Bergmann’s “less is more” philosophy. Its luminous, 8.8-pound acrylic platter floats on a thin film of air, and is centered by a steel spindle in a low-fiction, vibration-muffling polymer housing. The air supply is noiseless, and Sindre is extremely easy to operate and adjust.

Why Air?
Bergmann has found its airbearing technology to be superior to other bearing solutions in important ways. For example, the airbearing is frictionless, reducing bearing noise to a minimum and yielding exceptional speed stability. The airbearing tonearm also glides frictionless, its only contact with the turntable being through the stylus tip and the wire of the tonearm.

The bearings’ unique friction-freedom expresses itself through an emotionally engaging musical reproduction in which nuances and details are natural parts of a transparent and vivid acoustic image, with an unexpectedly effective bass response.

The Sindre’s air bearing consists of two aluminum discs between which a pumped air supply creates a thin, frictionless film of air. The belt-driven platter rests on a 7-lb. aluminum subplatter, and both reside atop a massive plinth comprising three layers of solid fiber board. The plinth stabilizes the tonearm, and rests on three adjustable spikes for easy leveling. The spikes provide the smallest contact surface possible to prevent substructure vibrations from reaching the turntable.

The tonearm is made of a very hard aluminum alloy. It consists of a long fixed air pipe with small vents that create a frictionless film of air on which the pipe gently floats. The arm tube is made of carbon fiber and mounted on this sliding pipe. The head shell, made with the same hard alloy as the rest of the tonearm, is parallel with the sliding pipe, which results in a perfect azimuth. The internal wire is twisted in one piece from clips to plugs to minimize soldering along the sensitive signal path. The tonearm includes an adjustment for the Vertical Tracking Angle (VTA), and another for horizontally adjusting the air pipe, which is independent of the plinth.

The Sindre Airbearing Turntable with Airbearing Tonearm is available now from authorized dealers at a suggested price of $20,000 (U.S. MSRP). It can be seen with other outstanding Aaudio Imports products at the Venetian Hotel, Suites 30-116, 30-118 and 30-120 during CES.

About Bergman
Bergmann Audio is a Danish manufacturer specializing in airbearing turntables and linear tracking airbearing tonearms. Every part is handcrafted in Denmark to optimize the airbearing principle, and achieve the exceptional sound and timeless designs for which Bergmann is known.

About Audio Imports
Based in Parker, Colorado, Aaudio Imports is a leading supplier of truly world-class high-end audio products to top quality dealers. Its high-end manufacturers, selected from companies around the world, also stand out from the crowd, and include Acapella in Germany, Audiotop in Switzerland, Bergmann Audio in Denmark, Einstein Audio Components in Germany, Isoclean Power in Hong Kong, Lindemann and Millennium Audio in Germany, Stage III Concepts in the U.S., Tidal Audio in Germany, Weizhi Precision in Taiwan, and Ypsilon Electronics in Greece. Aaudio Imports dealers are true music lovers, selected for their product knowledge, listening skills, and desire to seek out only the best for their customers.