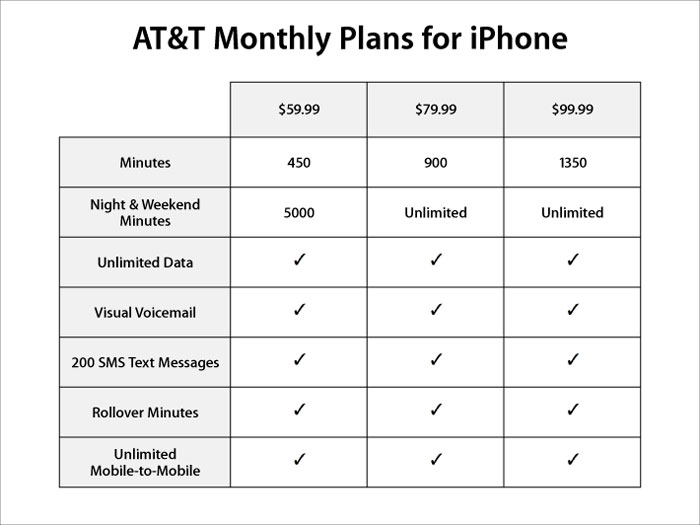 AT&T Inc. and Apple today announced three simple, affordable service plans for iPhone™ which start at just $59.99 per month. All three plans include unlimited data, Visual Voicemail, 200 SMS text messages, roll-over minutes and unlimited mobile-to-mobile calling. With everything else already included, iPhone customers can easily choose the plan that’s right for them based on the amount of voice minutes they plan to use each month. In addition, iPhone customers can choose from any of AT&T’s standard service plans.

“AT&T has the largest voice and data network in America, the largest mobile-to-mobile calling community and the fewest dropped calls,” said Randall Stephenson, chairman and CEO, AT&T. “AT&T has invested more than 16 billion dollars in its wireless network between 2005 and 2007, and iPhone customers will enjoy the best voice and data network in the nation.”

“We want to make choosing a service plan simple and easy, so every plan includes unlimited data with direct Internet access, along with Visual Voicemail and a host of other goodies,” said Steve Jobs, Apple’s CEO. “We think these three plans give customers the flexibility to experience all of iPhone’s revolutionary features at affordable and competitive prices.”

iPhone introduces an entirely new user interface based on a revolutionary multi-touch display and pioneering new software that allows users to control iPhone with just a tap, flick or pinch of their fingers. iPhone combines three products into one small and lightweight handheld device–a revolutionary mobile phone, a widescreen iPod, and the Internet in your pocket with best-ever applications on a mobile phone for email, web browsing and maps. iPhone ushers in an era of software power and sophistication never before seen in a mobile device, which completely redefines what users can do on their mobile phones.

Pricing & Availability
iPhone goes on sale at 6:00 p.m. (local time) on Friday, June 29 and will be sold in the US through Apple’s retail and online stores and AT&T retail stores. iPhone will be available in a 4GB model for $499 (US) and an 8GB model for $599 (US), and will work with either a PC or Mac. All iPhone monthly service plans are available for individuals and families and are based on a new two-year service agreement with AT&T. Individual plans are priced at $59.99 for 450 minutes, $79.99 for 900 minutes and $99.99 for 1,350 minutes. All plans include unlimited data (email and web), Visual Voicemail, 200 SMS text messages, roll over minutes and unlimited mobile-to-mobile and a one-time activation fee of $36. Family plans are also available.

About AT&T
AT&T Inc. is a premier communications holding company. Its subsidiaries and affiliates, AT&T operating companies, are the providers of AT&T services in the United States and around the world. Among their offerings are the world’s most advanced IP-based business communications services and the nation’s leading wireless, high speed Internet access and voice services. In domestic markets, AT&T is known for the directory publishing and advertising sales leadership of its Yellow Pages and YELLOWPAGES.COM organizations, and the AT&T brand is licensed to innovators in such fields as communications equipment. As part of its three-screen integration strategy, AT&T is expanding its TV entertainment offerings. Additional information about AT&T Inc. and the products and services provided by AT&T subsidiaries and affiliates is available at http://www.att.com.

About Apple
Apple ignited the personal computer revolution in the 1970s with the Apple II and reinvented the personal computer in the 1980s with the Macintosh. Today, Apple continues to lead the industry in innovation with its award-winning computers, OS X operating system and iLife and professional applications. Apple is also spearheading the digital media revolution with its iPod portable music and video players and iTunes online store, and will enter the mobile phone market this year with its revolutionary iPhone.