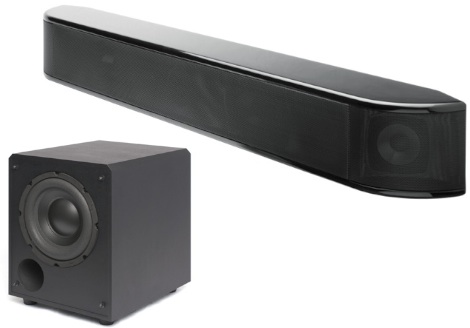 While the new FS-7.1 looks quite different with its redesigned enclosure and grilles, the major improvements are under the hood. Now the surround drivers are angled forward for improved surround-sound effects in rooms even when the listening room doesn't have nearby side walls. The company also revoiced the crossover for smoother, more accurate sound and improved power-handling capabilities. It also boasts both keyhole and threaded inserts for easy mounting.

Like its predecessor, the FS-7.1 works best with a subwoofer, and Atlantic Technology upgraded that too. The new 125-watt SB-900 subwoofer has a more powerful amplifier than the 100-watt SB-800, and an improved limiter that gives it the ability to play louder. Together, the FS-7.1 and SB-900 deliver a simple and highly capable two-box solution for outstanding 7-channel home theater.

Price and Availability
The Atlantic Technology FS-7.1 soundbar is available now for $950 and the SB-900 costs another $350.