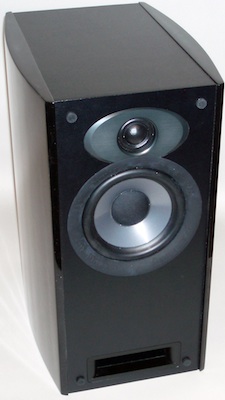 Atlantic Technology announced a prototype bookshelf speaker called the AT-2 utilizing its revolutionary H-PAS bass technology. The prototype Atlantic Technology AT-2 has an interior acoustic volume of less than 1/2-cubic foot, yet it delivers full, rich bass response down to 38Hz at -3dB, which is exceptional bass performance for such a small speaker.

Atlantic Technology’s H-PAS technology, which was first demonstrated in prototype form last year at CEDIA, has been licensed to a range of loudspeaker and consumer electronics manufacturers. This technology is now available to consumers with the factory’s mid-summer shipments of the first production Atlantic Technology AT-1 floor-standing loudspeakers.

H-PAS technology is the result of a collaborative effort between Atlantic Technology and Phil Clements of Clements Solus who first recognized that there were ways to beat the old Thiel-Small formulas, which for over 50 years have seemed to establish a fixed relationship between the cabinet size and bass response of loudspeakers. Engineers at Atlantic were able to codify Clements’ discoveries and make it possible to apply H-PAS technology to a wide range of speaker designs.

The characteristic performance of H-PAS allows exceptionally deep response with very low distortion relative to speaker size. High-level, low frequency sounds are notable for their clarity and impact, with none of the floppy-diaphragm sound that accompanies too many subwoofers.

The prototype version of Atlantic Technology’s upcoming AT-2 bookshelf loudspeaker uses a single 5-1/4″ long-excursion woofer and the same 1 1/8″ Low Resonance Tweeter (LRT) used in the AT-1. It has a crossover frequency of 2,100 Hz, which is much higher than most speakers in this size range. The prototype cabinet dimensions are just 8-3/4 inches wide by 15 5/8 inches high 12-1/4 inches deep (222 x 396 x 310mm).

Price and Availability (Update)
The Atlantic Technology AT-2 loudspeakers have been released on December 14, 2011 for $1,800 per pair.

“The H-PAS algorithm has proven remarkably versatile as we scale it up and down. We’ve been working with both our H-PAS licensees and our own engineers to produce a wide range of systems, from high-end to desk-top speakers.”
— Peter Tribeman, Atlantic Technology’s President