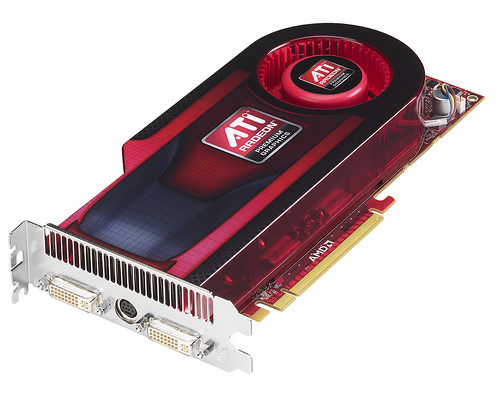 “Throughout the 40-year history of AMD, we have continually focused on technology firsts that deliver superior value to the customer,” said Rick Bergman, senior vice president, Products Group, AMD. “The 1 GHz ATI Radeon HD 4890 continues that tradition by increasing the performance and compute power of our flagship single-GPU solution, ensuring a great experience whether our customers are playing the latest DirectX 10.1 game or running GPU accelerated applications built with OpenCL.”

Here is what partners are saying about the overclocked edition of the ATI Radeon HD 4890 graphics card:

“Achieving air-cooled clock speeds of 1 GHz with our Vapor-X cooler immediately puts the new Sapphire HD 4890 Atomic Edition graphics card in an overclocking class of its own,” said Adrian Thomson, vice president, Marketing, Sapphire. “At 150 MHz above stock speeds, this card will unlock new levels of performance and allow gamers to push the latest DirectX 10.1 titles to new highs in image quality and frame rates.”< !-/quote-!>

“XFX is renowned for its ability to design and deliver high-performance graphics products, expertly overclocked to maximize every aspect of the GPU,” said Eddie Memon, senior vice president, Marketing, XFX. “The XFX team was excited to see just how far we could push the 1 GHz ATI Radeon HD 4890. I know our customers are going to love the performance of XFX’s ATI Radeon™ HD 4890 Black Edition. Hitting 1GHz is an amazing feat, even more so when done in production-level volumes and with overclocking headroom to spare.”< !-/quote-!>