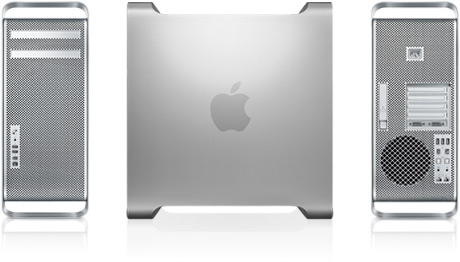 Apple today introduced the new Mac Pro with eight processor cores and a new system architecture that delivers up to twice the performance of its predecessor*. The new Mac Pro combines two of Intel’s new 45 nanometer Quad-Core Xeon processors running up to 3.2 GHz, powerful new graphics and up to 4TB of internal storage to offer the ideal system for creative professionals, 3D digital content creators and scientists. The standard 8-core configuration starts at just $2,799.

The new Mac Pro features the latest Quad-Core Intel Xeon 5400 series processors based on state-of-the-art 45nm Intel Core microarchitecture running up to 3.2 GHz, each with 12MB of L2 cache per processor for breakthrough performance and power efficiency. With a new high-bandwidth hardware architecture, dual-independent 1600 MHz front side buses and up to 32GB of 800 MHz DDR2 ECC FB-DIMM memory, the new Mac Pro achieves a 61 percent increase in memory throughput**.

Every Mac Pro comes standard with the ATI Radeon HD 2600 XT graphics card with 256MB of video memory. The Mac Pro includes a new PCI Express 2.0 graphics slot that delivers up to double the bandwidth compared to the previous generation, and supports the latest generation of graphics cards from NVIDIA, such as the NVIDIA GeForce 8800 GT with 512MB of video memory, or NVIDIA Quadro FX 5600 with 1.5GB of video memory and a 3-D stereo port for stereo-in-a-window applications. With support for up to four graphics cards, the new Mac Pro can drive up to eight 30-inch displays at once for advanced visualization and large display walls.

The Mac Pro is the most expandable Mac ever, featuring four internal hard drive bays with direct-attach, cable-free installation of four 1TB Serial ATA hard drives, totaling 4TB of internal storage and support for two SuperDrives. With optional 15000 rpm SAS drives that can deliver up to 250MB/s of RAID 5 disk I/O performance, the Mac Pro is ideal for film and video editors. Combined with SATA or SAS drives, using an optional Mac Pro RAID card offers the ultimate data protection and disk I/O performance on the Mac Pro. The Mac Pro is easily and conveniently accessible in front and back so users can connect external devices with five USB 2.0, two FireWire 400, two FireWire 800, optical and analog audio in and out, dual Gigabit Ethernet ports and a headphone jack.

Every Mac Pro includes Leopard™, the sixth major release of the world’s most advanced operating system. Leopard is packed with more than 300 new features and introduces a brand new desktop with Stacks, a new way to easily access files from the Dock; a redesigned Finder that lets users quickly browse and share files between multiple Macs; Quick Look, a new way to instantly see files without opening an application; Spaces, an intuitive new feature used to create groups of applications and instantly switch between them; and Time Machine™, an effortless way to automatically back up everything on a Mac. Featuring an improved scheduler and other multi-core technology, Leopard is a perfect companion to the Mac Pro, making applications faster and helping application developers take advantage of multi-core systems.

Pricing & Availability
The new Mac Pro is shipping today and will be available through the Apple Store (www.apple.com), Apple’s retail stores and Apple Authorized Resellers.

**Testing conducted by Apple in December 2007 using a preproduction 2.8 GHz 8-core Mac Pro with a 2.66 GHz quad-core Mac Pro. All systems were configured with 4GB of RAM. Results are based on the STREAM v. 5.6 benchmark (www.cs.virginia.edu/stream/ref.html) using OMP support for multiprocessor-compiled builds.