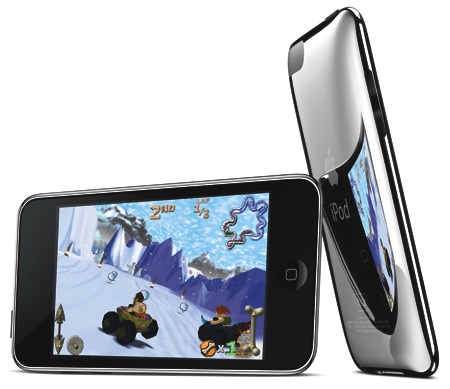 The Funnest iPod Ever — Perfect for Music, Movies & Games

“iPod touch is the funnest iPod we’ve ever created,” said Steve Jobs, Apple’s CEO. “Users can listen to millions of songs, watch thousands of Hollywood movies and now, thanks to the App Store, download and play hundreds of great games on their iPod touch.”

The new iPod touch is smaller and lighter than the original, with a sleek new design that features a contoured metal enclosure with integrated volume control buttons and a brilliant 3.5-inch widescreen glass display. With its rounded edges, flush display and curved, more compact design, the new iPod touch is more comfortable to hold and more portable than ever.

iPod touch users can choose from hundreds of exciting game titles such as “Spore Origins” and “Scrabble” from Electronic Arts, and “Real Football 2009” from Gameloft available on iTunes or directly through the App Store application on the iPod touch. The revolutionary App Store works over Wi-Fi, enabling users to browse, purchase and wirelessly download applications directly onto their iPod touch and start using them instantly. The App Store features an incredible array of applications in a wide variety of categories, including games, travel, entertainment, social networking, sports and much more.

The new iPod touch works with the new iTunes 8 Genius feature, allowing customers to automatically create playlists while on the go. Users can preview the playlist Genius creates, refresh the list to choose different songs and save Genius playlists to enjoy again later.

The iPod is the world’s most popular family of digital music players with over 160 million sold. Apple’s incredible new lineup includes the iPod shuffle in four vivid new colors starting at just $49; the iPod classic in one slimline model with 50 percent more capacity for the same great price — 120GB of storage for just $249; the fourth generation iPod nano featuring a gorgeous curved metal and curved glass enclosure, in nine vibrant colors starting at $149; and the second generation iPod touch now starting at just $229. iPod owners can choose from a vast ecosystem of accessories with over 5,000 products made specifically for the iPod including speaker systems, fitness accessories, fashionable cases and iPod connectivity available in over 90 percent of new car models sold in the US.

Pricing & Availability
The new iPod touch is available immediately for a suggested price of $229 (US) for the 8GB model, $299 (US) for the 16GB and $399 (US) for the 32 GB model through the Apple Store (www.apple.com), Apple’s retail stores and Apple Authorized Resellers. iPod touch requires a Mac with a USB 2.0 port, Mac OS X v10.4.10 or later and iTunes 8; or a Windows PC with a USB 2.0 port and Windows Vista or Windows XP Home or Professional (Service Pack 2) or later and iTunes 8. Existing iPod touch users can update to the latest 2.1 software for just $9.95 to add the new Genius feature. iPod touch owners who already have the 2.0 software get the 2.1 software update for free. Simply download the latest version of iTunes onto your Mac or PC, and purchase the 2.1 software update via iTunes.