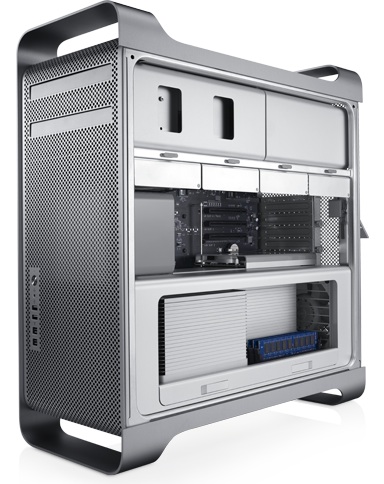 Apple today introduced the new Mac Pro using Intel “Nehalem” Xeon processors and a next-generation system architecture to deliver up to twice the performance of the previous generation system.* The new Mac Pro starts at $2,499 and features the latest graphics technology and an updated interior that makes expansion even easier than before.

“The new Mac Pro is a significant upgrade and starts at $300 less than before,” said Philip Schiller, Apple’s senior vice president of Worldwide Product Marketing. “The Mac Pro features an advanced system architecture, new faster processors and our best-ever graphics options to deliver a faster, more powerful system that our professional customers are going to love.”

The new Mac Pro includes Intel Xeon processors running at speeds up to 2.93 GHz, each with an integrated memory controller with three channels of 1066 MHz DDR3 ECC memory that delivers up to 2.4 times the memory bandwidth while cutting memory latency up to 40 percent.** Every Mac Pro comes standard with the NVIDIA GeForce GT 120 with 512MB of GDDR3 memory, a high-performance graphics card with nearly three times greater performance when compared to the previous generation system.*** An optional ATI Radeon HD 4870 is available for even more performance. With both a Mini DisplayPort and DVI port, the new Mac Pro provides out-of-the-box support for the 24-inch Apple LED Cinema Display, the 30-inch Apple Cinema HD Display, or other DVI based displays.

An updated interior provides easy access to all components within the Mac Pro for hassle free expansion. The Mac Pro includes four direct-attach cable-free hard drive carriers for installing up to 4TB of internal storage when using 1TB 7200-rpm Serial ATA drives. An optional cable-free Mac Pro RAID card delivers performance up to 550MB/s **** and allows the four internal drive bays to be set up in RAID 0, 1, 5, or 0+1 configurations for improved disk performance and redundant data protection.

Continuing Apple’s commitment to the environment, the new Mac Pro exceeds Energy Star 4.0 requirements and is leading the industry as an early adopter of the more stringent Energy Star 5.0 requirements which will become effective later this year. The Mac Pro enclosure is made of highly recyclable aluminum and the interior is designed to be more material-efficient. The Mac Pro uses PVC-free internal cables and components and contains no brominated flame retardants. The new Mac Pro achieves EPEAT Gold status.*****

Every Mac includes Leopard, the world’s most advanced operating system which features Time Machine™, an effortless way to automatically back up everything on a Mac; a redesigned Finder™ that lets users quickly browse and share files between multiple Macs; Quick Look, the best way to instantly see files without opening an application; Spaces, an intuitive feature used to create groups of applications and instantly switch between them; Mail with easy setup and elegant, personalized stationery; and iChat, the most advanced video chat. Every Mac comes with Apple’s innovative iLife ’09 suite of applications for managing photos, making movies and creating and learning to play music. iLife ’09 features iPhoto, which introduces Faces and Places as breakthrough new ways to easily organize and manage your photos; iMovie with powerful easy-to-use new features such as Precision Editor, video stabilization and advanced drag and drop; and GarageBand which introduces a whole new way to help you learn to play piano and guitar. Optional Apple professional applications include Aperture™, Final Cut Express, Final Cut Studio, Logic Express, Logic Studio and Shake. 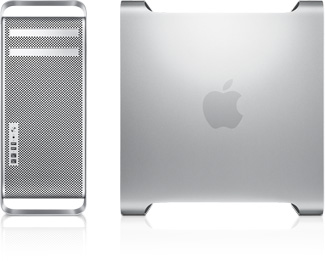 Pricing & Availability
The new Mac Pro will be available next week through the Apple Store (www.apple.com), Apple’s retail stores and Apple Authorized Resellers.

*****EPEAT is an independent organization that helps customers compare the environmental performance of notebooks and desktops. Products meeting all of the 23 required criteria and at least 75 percent of the optional criteria are recognized as EPEAT Gold products. The EPEAT program was conceived by the US EPA and is based on IEEE 1680 standard for Environmental Assessment of Personal Computer Products. For more information visit www.epeat.net. Systems configured with multiple graphics cards, a Mac Pro RAID card, or a Fibre Channel card do not meet Energy Star or EPEAT Gold requirements.