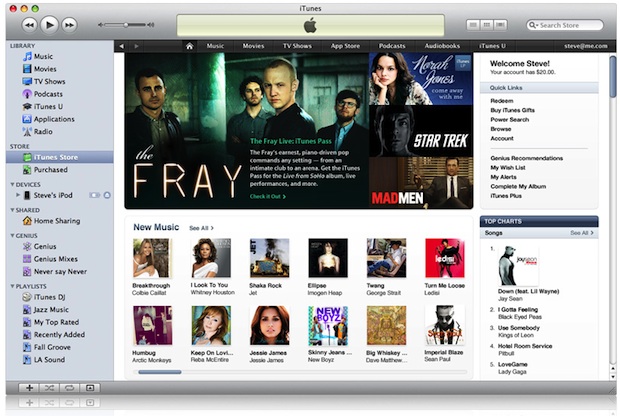 Apple today introduced iTunes 9, the latest version of the world’s most popular software application to purchase, manage and play media, packed with innovative features such as iTunes LP, Home Sharing and Genius Mixes, as well as a redesigned store and improved syncing. iTunes 9 makes it easier than ever to discover, purchase and enjoy your music, movies, TV shows, and apps for iPhone™ and iPod touch from Apple’s revolutionary App Store. Plus, Home Sharing now lets you easily transfer songs, movies and TV shows to other computers in your home.

“iTunes 9 is a great iTunes release, with innovative features that make using iTunes better than ever and iTunes content richer than ever,” said Steve Jobs, Apple’s CEO. “iTunes LP, for example, lets artists share more of their creativity with fans and gives music lovers the feeling of being immersed in an entire album with art, lyrics, liner notes, photos and videos.”

iTunes 9 also introduces Home Sharing, which lets you easily transfer music, movies and TV shows among up to five authorized computers in your home. Family members can now view up to five iTunes libraries on their home network, see only the portion of these libraries they don’t already have, import their favorite content directly to their own libraries, and automatically add new purchases from other computers into their library.

The incredibly popular Genius feature gets even better with Genius Mixes which are created using the results of over 27 million music libraries with over 54 billion songs that have been submitted and analyzed by Genius. The new Genius Mixes feature is like having a “Genius” DJ that automatically generates up to 12 endless mixes of songs from your iTunes library that go great together.

With improved syncing in iTunes 9 and iPhone OS 3.1, you can now organize your iPhone apps right in iTunes and they will automatically appear on your iPhone with the same layout. Plus, syncing music, photos, movies and TV shows is easier than ever with the added ability to sync music by artist and genre and sync photos by Events and Faces. The iTunes Store on iPhone now features precut ringtone downloads with over 20,000 ringtones priced at just $1.29.

iTunes 9 is available immediately as a free download at www.itunes.com.

The iTunes Store is the world’s most popular online music, TV and movie store with a catalog of over 11 million songs, over 50,000 TV episodes and over 7,500 films including over 2,000 in stunning high definition video. With Apple’s legendary ease of use, pioneering features such as iTunes Movie Rentals, integrated podcasting support, the ability to turn previously purchased tracks into complete albums at a reduced price, and seamless integration with iPod and iPhone, the iTunes Store is the best way for Mac and PC users to legally discover, purchase and download music and video online.