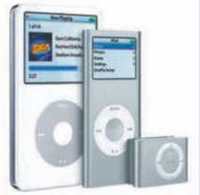 “At this historic milestone, we want to thank music lovers everywhere for making iPod such an incredible success,” said Steve Jobs, Apple’s CEO. “iPod has helped millions of people around the world rekindle their passion for music, and we’re thrilled to be a part of that.”

“It’s hard to remember what I did before the iPod,” said Mary J. Blige, GRAMMY Award-winning singer. “iPod is more than just a music player, it’s an extension of your personality and a great way to take your favorite music with you everywhere you go.”

“Without the iPod, the digital music age would have been defined by files and folders instead of songs and albums,” said John Mayer, GRAMMY Award-winning singer-songwriter and guitarist. “Though the medium of music has changed, the iPod experience has kept the spirit of what it means to be a music lover alive.”

The iPod has also sparked an unprecedented ecosystem of over 4,000 accessories made specifically for the iPod that range from fashionable cases to speaker systems, and more than 70 percent of 2007-model US automobiles currently offer iPod connectivity.

“I take my running shoes and my iPod with me everywhere,” said Lance Armstrong, seven-time Tour de France champion. “I listen to music when I run. Having my music with me is really motivating.”

Apple ignited the personal computer revolution in the 1970s with the Apple II and reinvented the personal computer in the 1980s with the Macintosh. Today, Apple continues to lead the industry in innovation with its award-winning computers, OS X operating system and iLife and professional applications. Apple is also spearheading the digital media revolution with its iPod portable music and video players and iTunes online store, and will enter the mobile phone market this year with its revolutionary iPhone.