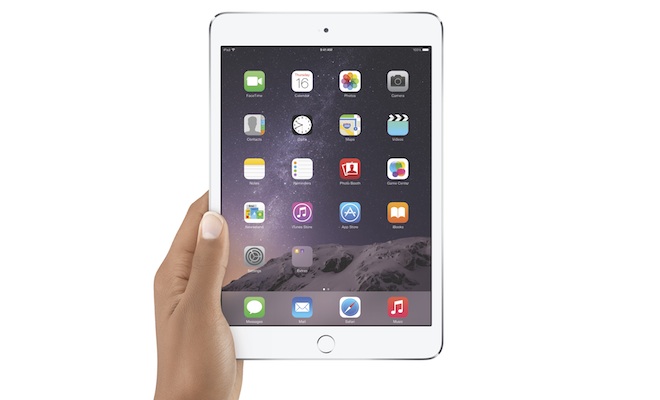 Apple today introduced iPad mini 3, which adds a Touch ID fingerprint sensor, for $399. The third-generation tablet keeps the same 7.9-inch Retina display as the previous model, which is now being renamed to iPad mini 2 (it was iPad mini with Retina Display). The new model only adds Touch ID feature for security. Otherwise all specifications are the same. Both iPad minis feature the same Retina display, A7 chip, 5MP iSight camera, FaceTime HD camera and ultrafast wireless.

Touch ID gives iPad mini 3 users a simple and secure way to unlock iPad with just the touch of a finger, plus the ability to authenticate within apps to better protect logins and data. Touch ID can be used as a secure way to approve purchases from the App Store, iTunes Store or iBooks Store, and with Apple Pay, when paying for physical goods and services within apps.

As with all iPads, they either come with or can be upgraded to iOS 8.1, which adds Continuity features that enable all your Apple products to work together seamlessly. Handoff lets you start an activity on one device and pass it to another, and when your iPhone is on the same Wi-Fi network, you can make and receive phone calls right from your iPad.

Pricing & Availability
iPad mini 3 will start shipping next week in 29 countries and territories starting at $399 (US) for 16GB Wi-Fi model. The iPad mini 2 price has been dropped to $299, and the original iPad mini will cost $249. Online pre-orders begin Friday, October 17, 2014.

Most people would be better off getting the iPad mini 2 for $100 less.