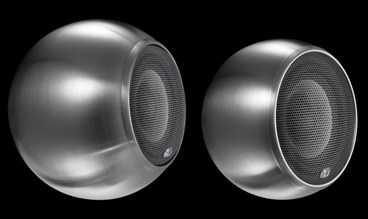 “We designed these new titanium loudspeakers to mimic the incredible dynamics and transparency of our Reference 3 speakers,” says Anthony Gallo, founder of Anthony Gallo Acoustics. “Though they are small, these new Ti transducers are true high-end drivers of a caliber never before seen or heard in affordable consumer audio.”

The Ti series offers unprecedented treble extension beyond 22kHz and achieves exceptional bass extension, which is only possible with the company’s patented S2 technology. This S2 technology permits 7.5 octaves of linear bandwidth from a single 3″ driver, which uses a pure titanium diaphragm that is strategically damped with paper and suspended on a Santoprene surround.

The titanium/paper coupling combines the smooth and natural sound qualities of organic fibers with the superior treble extension and improved off-axis linearity of titanium. The voice coil, which has been enlarged to 1″ diameter for even more dynamic range, is supported by an oversized Neodymium magnet with video shielding for freedom of placement. An under-hung architecture makes for even lower distortion and higher outputs than before.

About Anthony Gallo Acoustics:
Anthony Gallo, who created his first loudspeaker at the age of 14, has been raising the bar in loudspeaker design for more than 25 years. He formed Anthony Gallo Acoustics (AGA) in the early 1990’s in order to bring his creations to the marketplace. His first commercially available product, the Nucleus Solo loudspeaker, went on sale in 1994. The speaker, which contained the unique blend of creative industrial design and top-quality sound components that quickly became an AGA trademark, was an immediate success. Today, AGA’s products are sold in over 40 countries, including a complete line of stereo speakers, home theaters speakers & systems, powered subwoofers and installation accessories to complement their award-winning speaker systems.