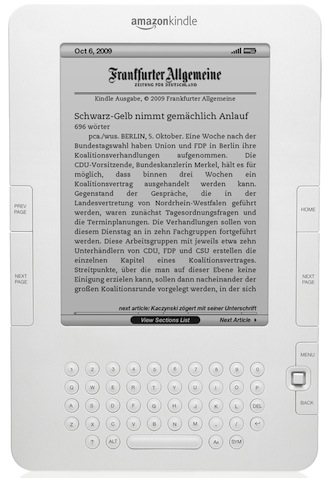 “We have millions of customers in countries all over the world who read English-language books,” said Jeff Bezos, Amazon.com Founder and CEO. “Kindle enables these customers to think of a book and download it wirelessly in less than 60 seconds.”

Kindle wirelessly downloads books, newspapers, magazines, blogs, and personal documents to a crisp, high-resolution 6-inch electronic ink display that looks and reads like real paper. Kindle utilizes the same 3G wireless technology as advanced cell phones, so you never need to hunt for a Wi-Fi hotspot or sync with a PC. Readers can wirelessly shop the Kindle Store, download books in less than 60 seconds, automatically receive newspaper and magazine subscriptions, receive personal documents, and read from their library–now in over 100 countries and territories.

“Kindle has revolutionized the way we purchase and read books, by making it mobile, easy and intuitive,” said Randall Stephenson, chairman and chief executive officer of AT&T. “We are excited to work with Amazon to help readers access books even faster and from significantly more places than ever before, including more than 100 countries and territories around the world through AT&T’s global wireless coverage.”

Over 85 top U.S. and international newspapers and magazines are also available in the Kindle Store for single purchase or subscription. Many international newspapers are available in the Kindle Store for the first time, including La Stampa (Italy), El Pais (Spain), El Universal (Mexico), O Globo (Brazil), The Daily Telegraph (UK), joining top papers such as The New York Times, The International Herald Tribune, Le Monde (France), Frankfurter Allgemeine Zeitung (Germany) and The Washington Post. Newspaper and magazine subscriptions are auto-delivered wirelessly to Kindle.