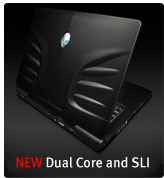 Continuing to lead the charge in mobile innovation, Alienware – the leading manufacturer of high-performance desktop, notebook and professional systems – achieved another industry first with the Area-51 m9750 notebook. This breakthrough offering is the first 17″ notebook in the world to fuse the astounding graphics capabilities of dual 512MB NVIDIA GeForce Go 7950 GTX graphics cards with NVIDIA SLI technology and the blazing speed of Intel Core 2 Duo mobile processors, making the dream system of mobile gamers and entertainment enthusiasts a reality.

“As a ‘CNET Best of CES 2007’ winner, the new Area-51 m9750 builds upon the best-in-class performance that pulsates throughout Alienware’s mobile line by delivering the most powerful combination of graphics and processors ever seen in a 17″ notebook,” said Frank Azor, Senior Vice-President and General Manager for Alienware’s Worldwide Product Group. “Add to that a vast array of media capabilities, ample hard drive capacity and a head-turning design and you have a notebook destined for greatness among gamers and digital media enthusiasts.”

“Alienware has created some of the most extreme gaming notebooks in the world with NVIDIA SLI technology and GeForce GPUs,” said Jeff Fisher, Senior Vice President of the GPU business unit at NVIDIA. “By combining these technologies with Intel Core 2 Duo processors, Alienware has again raised the bar for mobile HD entertainment.”

“World-class CPUs meet world-class graphics, making the Area-51 m9750 the must-have gaming notebook,” said Mooly Eden, Vice President and General Manager the Mobile Platforms Group at Intel. “With the performance of the Intel Core 2 Duo processor, you can have the fastest gaming notebook on the block, all in a system that is packaged to go.”