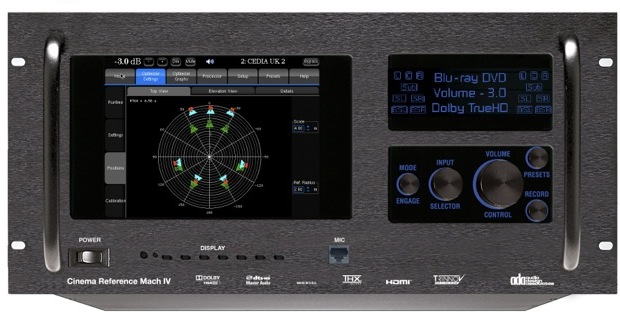 The Cinema Reference Mach IV features an impressive seven-inch 1080p front panel touch-screen display that doubles as a video preview display and setup interface. The rear panel boasts eight HDMI inputs with dual mirror HDMI outputs. By the time you connect a set-top-box, Blu-ray, game console, Apple TV, and camcorder, you are out of inputs. In addition to 12 audio-only components, you could connect at least 8 AV sources directly to the Cinema Reference. All switching is HDMI 1.4 3D compliant.

While the Cinema Reference Mach IV is feature loaded with every imaginable type of input connection, its defining feature is the built-in TEQ-16 sixteen-channel Trinnov electronic room correction optimizer. “The Cinema Reference Mach IV is the world’s only pre/pro with a built-in TEQ optimizer featuring Trinnov’s incredible technology.” adds Stoerger. “From both digital and HDMI inputs, the signal path directly to the output stage is purely digital with no A/D and D/A conversion in between processing and post-processing stages.”