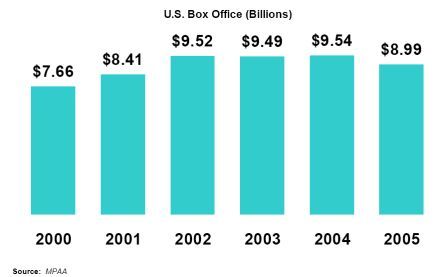 Los Angeles – The Motion Picture Association of America, Inc. (MPAA) today released its annual theatrical market statistics report including some new consumer information on moviegoing from an analysis conducted by Nielsen Entertainment/NRG. As has been reported widely, U.S. box office dipped 6% in 2005 but remained healthy, reporting nearly $9 billion in revenue. Last year, 1.4 billion theater tickets were sold in the U.S. and the worldwide box office recorded intake of $23 billion, which was a 7.9% decline over the previous year. At the same time, consumer information from the Nielsen analysis revealed that a majority of moviegoers were satisfied with their recent experiences at the movies and felt the movies were a “good investment of their time and money.”

“Despite increasing competition for consumers’ time and entertainment dollars, theater-going remains a satisfying constant in people’s lives,” said Chairman and CEO of the MPAA Dan Glickman. “That said, we can’t bury our heads in the sand. We have to do more to attract customers and keep regulars coming back. It is no secret that our industry faces new challenges but with every challenge, there is an exciting opportunity.”

MPAA data showed that blockbuster films had a banner year – eight films made over $200 million compared to just five in 2004. The total number of films released in the U.S. increased by 5.6% from 2004. New releases by the major motion picture studios grossed an average of $37 million in 2005, an increase of 7% over the past five years. Consistent with past years, family movies dominated the box office. PG-13 films comprised the majority of top grossers for the industry, with PG and PG-13 films accounting for 85% of last year’s top films.

The average cost to make and market a film in 2005 remained under $100 million and dipped slightly to $96.2 million. Marketing costs were up 5.2% and production costs went down 4% from the previous year. MPAA member companies spent more on network television and Internet advertising and less on newspapers and local television.

“Technology has not only changed the way people are able to view movies, it has changed the way our industry produces and advertises movies. We are exploring new ways to reach more people using innovative methods of communication and distribution,” said Glickman. “This data reflects those changes and also demonstrates the strength of the movie industry.”

A nationwide survey conducted by Nielsen Entertainment/NRG in August of 2005 indicated that 81% of moviegoers who saw at least one movie in 2005 believed the experience was a good investment of their time and money, versus 15% who preferred to watch the movie on DVD and 4% who said they should have not seen the movie at all. When it came to technology, those moviegoers who owned or subscribed to four or more home technologies (e.g. DVR service, large television, DVD player, VOD) were actually more avid moviegoers, seeing an average of two more movies per year than the moviegoer who owned or subscribed to fewer than four. Four in ten of these moviegoers plan to buy the last movie they saw on DVD, with more than half of them making this decision immediately after seeing the movie in a theater. Sixty-five percent of people surveyed say they prefer theaters as the ultimate movie watching experience. In addition, movies continue to be the most common form of paid entertainment options outside the home, such as sports and theme parks, based on available attendance data.