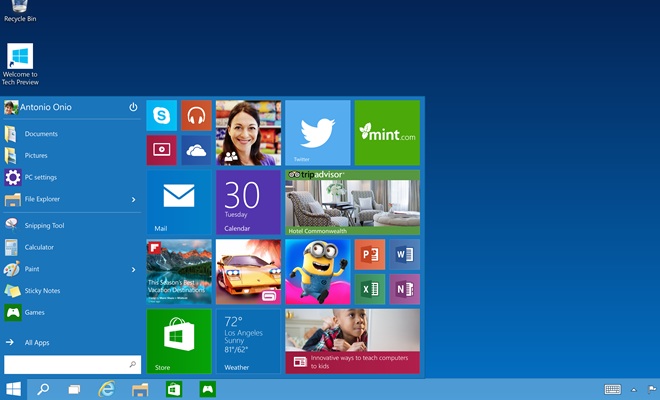 On September 30, 2014 Microsoft unveiled an early technical preview of the next Windows operating system, Windows 10. In case you are keeping track, there was never a Windows 9. The new interface appears as a hybrid of Windows 7 and Windows 8 to appeal to the broadest number of current users. The first thing users will notice is the familiar Start menu is back with a wider menu that includes live tiles.

Apps that run in a window
Apps from the Windows Store now open in the same format that desktop programs do. They can be resized and moved around, and have title bars at the top allowing users to maximize, minimize and close with a click.

Snap enhancements
Working in multiple apps at once is easier and more intuitive with snap improvements. A new quadrant layout allows up to four apps to be snapped on the same screen. Windows will also show other apps and programs running for additional snapping, and it will even make smart suggestions on filling available screen space with other open apps.

Multiple desktops. Instead of too many apps and files overlapping on a single desktop, it’s easy to create and switch between distinct desktops for different purposes and projects — whether for work or personal use.

The full 40 minute presentation can be viewed below.