GRAMMY-winning kora specialist Diabaté is one of the cornerstones of traditional Malian music and also a diverse collaborator, with his partners including his countrymen Ali Farka Touré and fellow kora player Ballaké Sissoko, plus Taj Mahal, Roswell Rudd, Björk and now the London Symphony Orchestra. As the delightful Promises, in which the LSO support electronic musician Floating Points and saxophonist Pharoah Sanders, was released just last month, it might seem the London Symphony are on something like a creative roll, but Kôrôlén dates from a 2008 concert at the Barbican Centre in London, with Ian Gardiner and Nico Muhly arranging the orchestra. The infusion of non-classical styles with the ol’ longhair tradition has historically been an iffy impulse at best, but this album, if not perfect in its combination of distinct aesthetics, does succeed, both through sensitivity (on the part of the orchestra) and flights of beauty from the kora, the balafon and late in the LP, vocals. A-

Kasten-Krause is a NYC-based composer and bassist who, in addition to playing on Broadway in Oklahoma!, has been recruited to play on works by Steve Reich and Alvin Lucier. More pertinent to Potential Landscapes’ reality is Kasten-Krause’s involvement with his city’s “DIY and experimental scenes,” and by extension, his desire to make a record rooted in deeper levels of collaboration than is the norm in avant-garde circles, with Cloud Nothings drummer Jason Gerycz, experimental vocalist Lisel (Eliza Bagg), Tigue percussionist Matt Evans, electric guitarist-composer Brendon Randall-Myers, and violinist Carol Johnson bringing (per the PR for the release) their “musical practices” to the album, rather than simply realizing Kasten-Krause’s ideas, which are drone-based and more specifically rooted in the work of Lucier, Éliane Radigue, Jon Gibson and Phill Niblock. The results are varied and yet deliver a coherent statement, and digestible, as the four tracks fit onto a single LP. An edition of 250 on wax, each with a unique hand-painted sleeve. A-

Last year, in the midst of the pandemic, keyboardist Putman and trumpeter Sarian began playing together (with the necessary precautions) at Studio Hicks, which is in fact another name for Sarian’s home, in an attempt to keep the creativity flowing and to maintain basic sanity. Two short digital-only volumes were subsequently released (both still available for download), with each sporting the serviceable tag of Improvisations. They combined into a statement of beauty and urgency. This set, available digitally, on digipak CD and LP (limited copies on red, cyan blue and black), wholly extends that worthiness (Part II is scheduled for release later this year). While Putman continues to play an electric model keyboard in this duo, its chiming resonances distinct from the acoustic mode he explores in the Telepathic Band and elsewhere, Sarian adds flugelhorn to the equation, maybe not a giant leap but still notable when considering the lean potency of these dialogues. The late-night aura gets tempered here, more through familiarity than design. A-

Like many jazz artists, UK saxophonist Dunmall is ridiculously prolific; this quartet session with his fellow Brits, pianist Tippett, guitarist Gibbs and drummer Fairclough, came out on CDr in 2000 in an edition of 100, meaning it was likely to be overlooked amid the more than 150 releases in Dunmall’s discography (that’s not counting the “sideman” dates). And so, it’s especially worthy of reissue (577 is offering a handsome digipak in an edition of 200), partly because Dunmall, in addition to tenor and soprano, plays fife and bagpipes here. The unusualness of the instrumental configuration undeniably adds to the appeal, and right away, as Gibbs’ guitar resonates like a mbira and Tippett dishes some washes of prepared piano. More importantly, the inspired interplay is sustained across the CD, and notably during the nearly 35-minute “For Lost Souls.” Along with the spark and energy of free improv, there is warmth that’s recognizably jazzy. The good news is 577 has more Dunmall scheduled for later in the year. A

The reactivation of Cabaret Voltaire by founding member Richard H. Kirk, and featuring Kirk alone, is an admirable undertaking focused solely on new material (live setlists lack anything from the back catalog) that produced the intermittently terrific comeback Shadow of Fear in late November of 2020. The “Shadow of Funk” EP (12-inch, CD and digital) offers the title track on side one with “Skinwalker” and “Billion Dollar” on the flip, three new selections (no remixes) that are nonetheless offered as a “companion” to the album from last year, but with results that are more driving in nature, and specifically more related to the performance side of Cabaret Voltaire’s current reality. But if Kirk cares not for nostalgia, he’s also disinterested in churning out dance cuts, as “Shadow of Funk” (the track) integrates Congolese elements that bring Konono Nº1 to mind. Appropriate for its title, “Skinwalker” begins in a sci-fi zone before getting down to thumping business. A-

Dekadrone, which came out last month, and BN9Drone, freshly out this week (both on double vinyl, CD and digital), join with Shadow of Fear and the above EP to complete the spectrum of the rejuvenated Cabaret Voltaire’s output. For listeners who are drawn to the more extreme corners of the outfit’s architecture, these sets are the two to buy of you can only buy two. Holding a solitary long track each (Dekadrone spans nearly 50 minutes and BN9Drone hits 64 minutes on the dot), they share the absence of drums, so please don’t expect either to unwind like a long club set. Indeed, the use of the term drone in these titles was likely intended to emphasize Kirk’s inclination toward drifting abstraction rather than unrelenting pound and thump, though there are a few observable differences. Integrating captured radio transmissions into its scheme, BN9Drone gets closest to the vibe of a mid-’80s homemade cassette release, the kind that would’ve been available only through mail-order. That Kirk revels in this sorta atmosphere without backsliding into the sound of “Extended Play” or Mix-Up is impressive. A-/ A-

Someone Stole My Shoes: Beyond The Q Division Sessions

The late Boston-area musician Mark Sandman is best known for fronting 1990s act Morphine and before that, reaching back to the mid-’80s, the blues-rock trio Treat Her Right. But in 1986 he also convened the Hypnosonics, described by Modern Harmonic as a “secret band,” for the recording of five songs at Boston’s Q Division studio. Someone Stole My Shoes issues these tracks on vinyl and combines them on CD with two cuts from the live-in-studio Fort Apache date from a decade hence (which was broadcast that year on Boston radio station WFNX as a lunchtime concert) that shapes-up Drums Were Beating. As a casual appreciator of Sandman’s main projects, neither set blows me away, but the horn-laden and funk-tinged contents do deliver an appealing and occasionally John Laurie-like twist to the man’s discography. The Fort Apache stuff hits hardest and benefits from the performance atmosphere, as a small audience was invited to attend. B+/ A-

jess joy is the recording/ performance moniker of Jessica Ramsey, who’s noted as a former member of Moon Honey, an outfit I haven’t heard but am keen to, partly to ascertain the length of the leap she’s taken on this, her solo debut. I suspect it’s a large one. There are three ingredients vying for the mantle of this record’s most striking characteristic. One is joy’s singing voice, which can alternate between fragile sweetness, warbling operatic hugeness and a more guttural thrust, occasionally in the span of seconds. Another is the bold hi-fidelity of joy’s style of art-pop, The third is the focused social commentary that begins with the title and extends through the LP’s ten tracks, which include a cover (better described as a reimagining) of Joan Baez’s “Silver Dagger.” I’d say the singing wins the crown, but upon reflection, it seems more fitting to say that joy, who reportedly has a performance art background, taps into cornerstones like Kate Bush, Laurie Anderson, Yoko Ono and Patti Smith and comes up with something that if not totally singular, is anything but retrograde. A-

Summer Sleeves, In the Throes of Woes

Having not heard Summer Sleeves frontman Jeremy Charbonneau’s prior outfit Smile Brigade, I had little insight into what In the Throes of Woes was going to sound like, other than its label Jigsaw specializing in varying strains of indie pop. So imagine my surprise when this record’s opening track reminded me of early ’70s Grateful Dead (it’s those “do-do-do-da-la-do”s). Had I perused the promo blurb, I would’ve gotten hip to a few comparisons that effectively illuminate a “classic” orientation, namely Ray Davies and Gram Parsons, but I didn’t read it, and in turn, I was struck. Struck in a good way. As the CD unfurls its dozen tracks, there are a few moves reminiscent of ’70s power-pop, but with a rootsy bar band angle that hits me as nearer to Petty and the Heartbreakers than to Cheap Trick. The more contempo similarities mentioned in said promo are Beachwood Sparks and Sneetches, but I can’t deny hearing Wilco at their most directly strum-rocking. While this is ultimately not a consciousness-scrambler, it still goes down easy. B+

Buy at Amazon (Tender and Mild)

This is the Seattle-based West’s second full-length (and I do believe it’s his vinyl debut), not counting two prior collabs with Cahalen Morrison and one with Olav Mjelva, and as stated in the PR for the set, the songwriter and multi-instrumentalist’s approach, which encompasses bluegrass and related styles (Americana in particular), is more inspired by John Hartford than Bill Monroe, a fondness that’s discernible as Tapered Point of Stone unwinds. What’s missing is Hartford’s eccentric side, though the lack is preferable to any strained gestures toward the offbeat. Abundant instead is ensemble playing that while impeccable, never hits the ear as flashy or athletic in nature (as said, Hartford over Monroe). But pretty? Oh sure, the contents are frequently gorgeous, but there’s weight to the songs, so that the whole avoids ever being too nice. There is fiddle, guitar, mandolin, dobro and upright bass, but the highlight of the album is “I Know Your Wandering Heart,” a vocal duet with Julie Fowlis that’s enhanced by the shruti box of Steph Coleman. A- 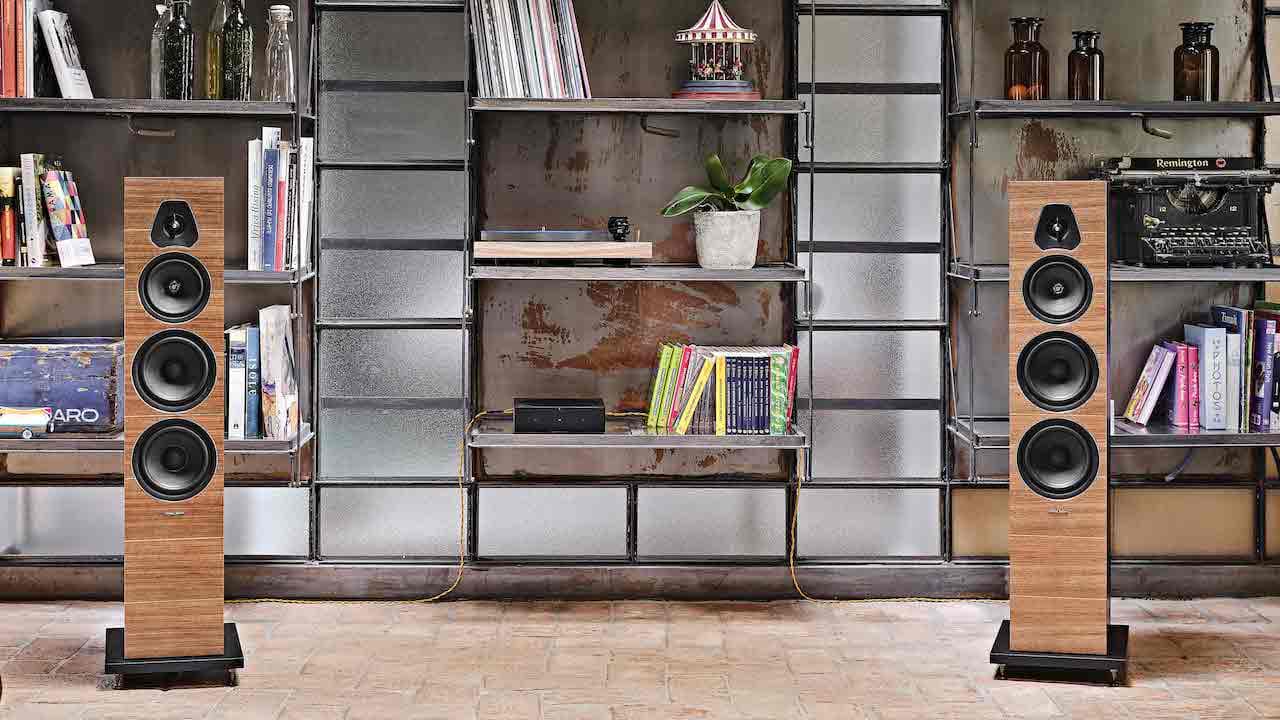 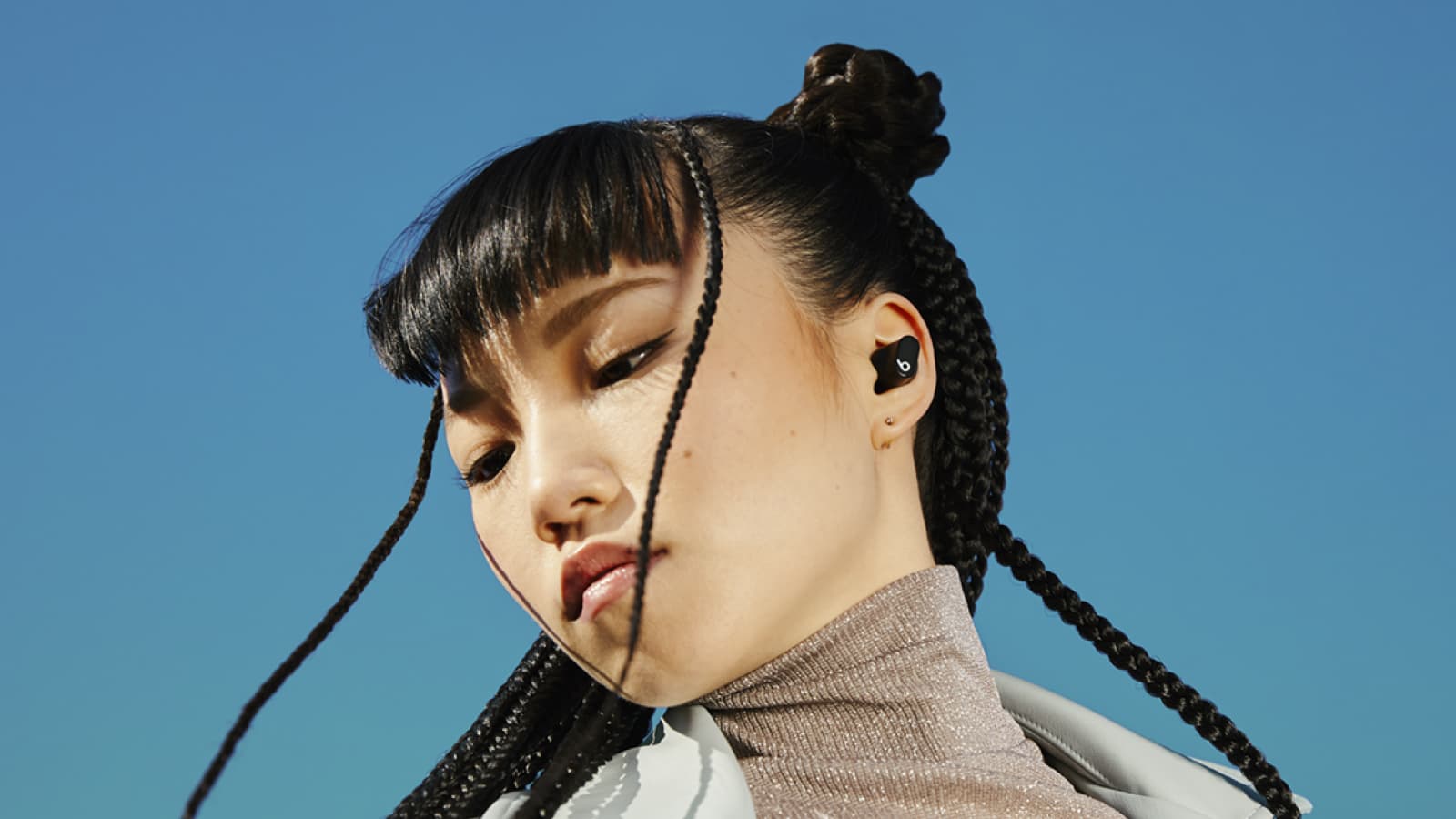 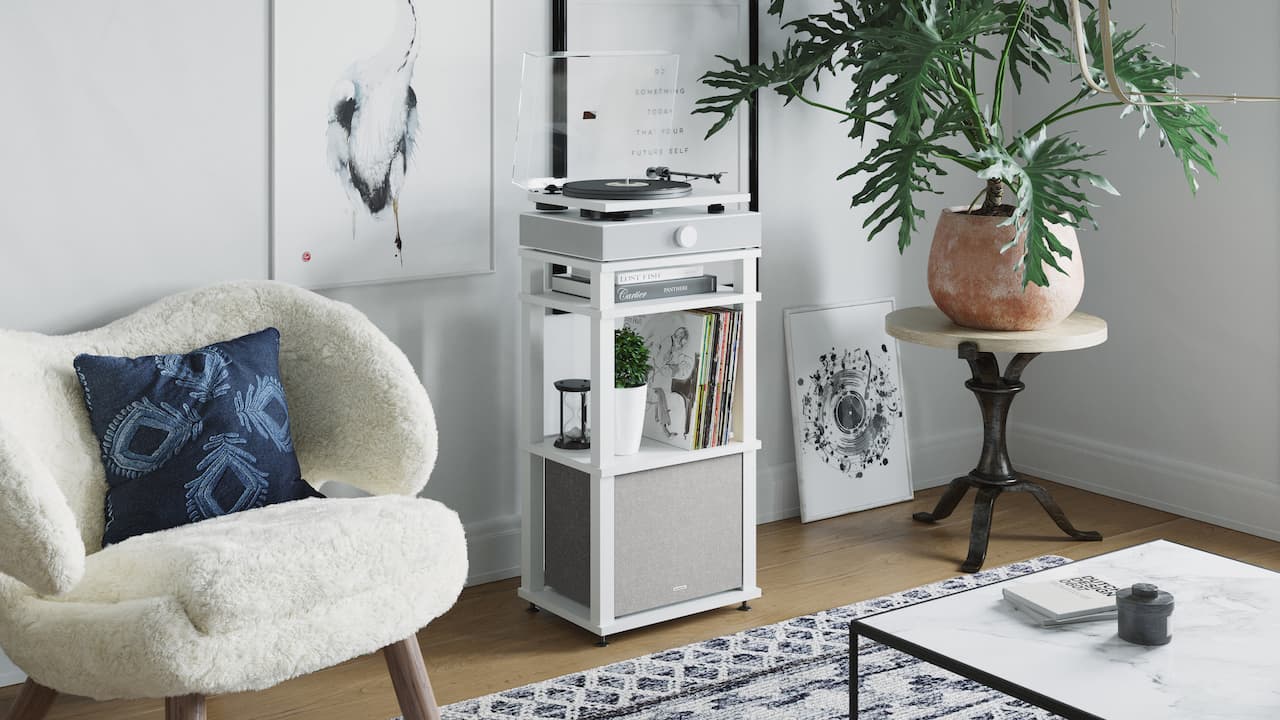 Enter the brand new Andover Audio SpinSub Subwoofer which is designed to complete the playback circle. 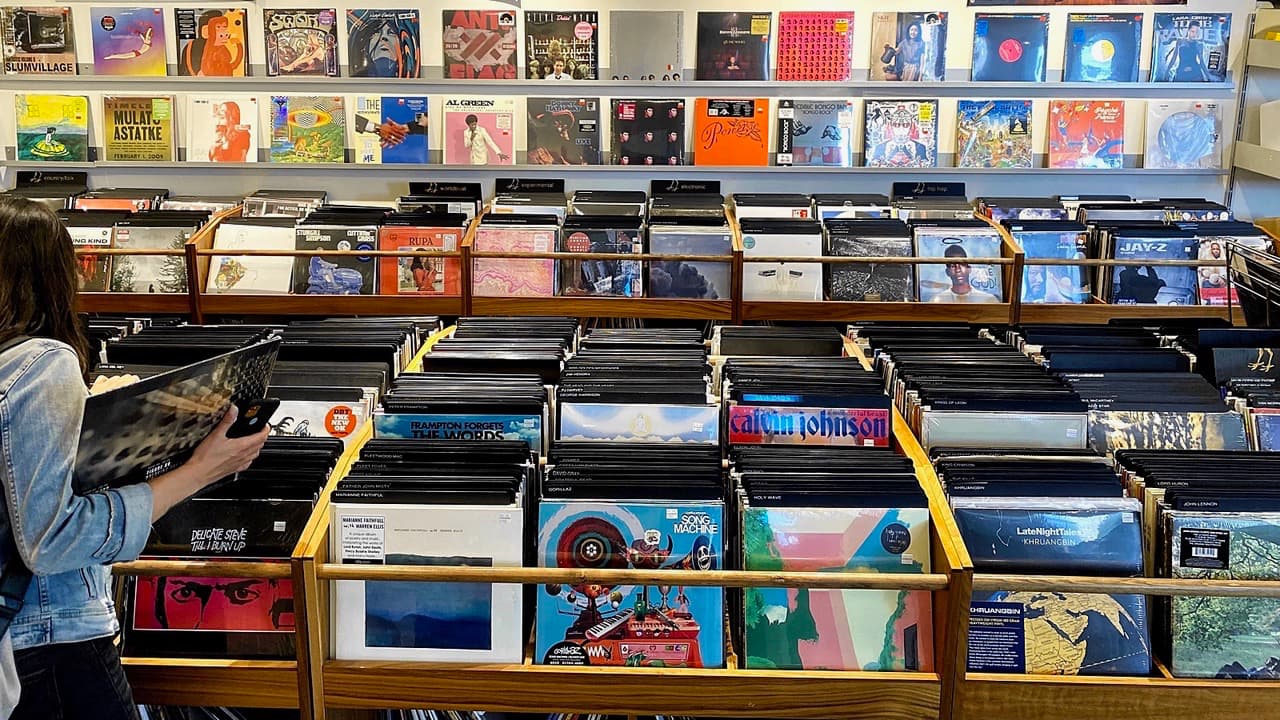 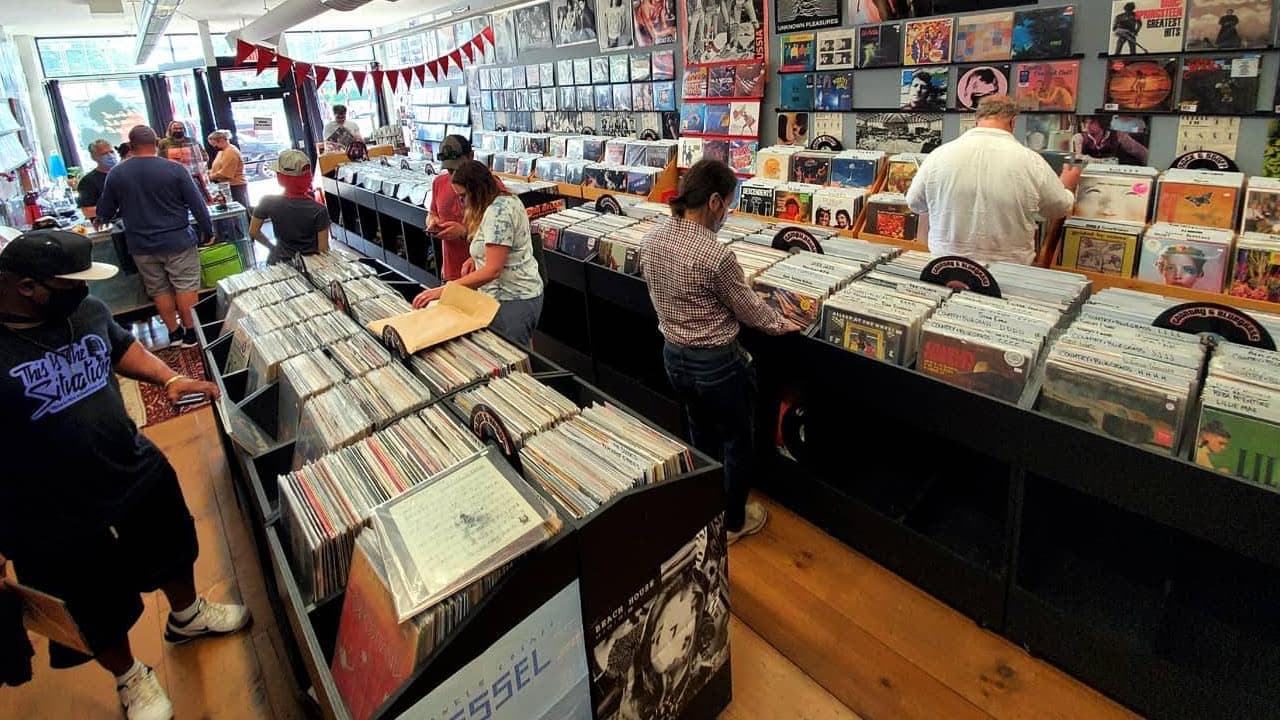