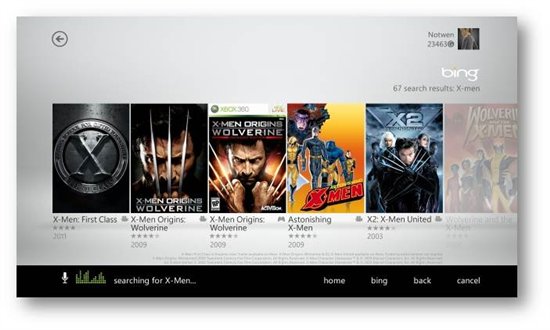 Microsoft today announced voice search with Bing on Xbox 360 and Kinect to effortlessly find the games, movies, TV shows, sports and music you want. You say it, Xbox finds it. Voice search works across media types and across apps so you can focus on deciding what to enjoy rather than where and how to find it.

Just saying: “Xbox Bing Lego” or “Xbox Bing X-Men” will give you all the available options for the movie, music, game and other matches around those titles. Bing on Xbox will search Netflix, Hulu+, ESPN, as well as music, video and Xbox LIVE marketplaces.

Because you may have several viewing options, Xbox will prioritize your choices based on what you own or the services to which you are a subscriber, such as Netflix. Bing on Xbox will help you decide by giving you other options to consider such as High Definition and purchase price. You can select, browse or refine your search using voice and hand gestures so that you find what you want in a fraction of the time it currently takes.

Availability
Voice search with Bing on Xbox will become available this holiday season, as part of the Xbox LIVE update. Bing on Xbox will initially be available in English in the United States, Canada and United Kingdom. Additional languages and dialects are also in the works.