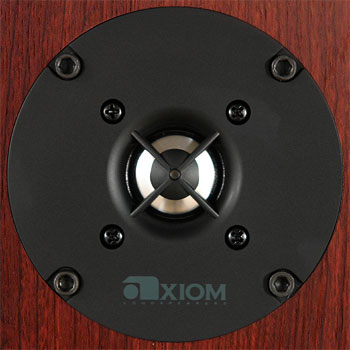 Modern Marvel
All of us take for granted lots of modern marvels, but it nevertheless still impressed me in that instant that a tiny reciprocating electro-mechanical motor– the voice coil of the Axiom M22 tweeter–moves a titanium dome back and forth 10,000 times per second to precisely reproduce that convincing triangle sound. (The triangle is an instrument of indefinite pitch but the bulk of its output is centered around 10,000 Hz.)

Think about it for a moment: the audio voltage, an AC signal representing the triangle’s complex acoustic spectrum zips out of the output transistors along the speaker cables reaching the tweeter’s voice-coil and magnet structure. In the second or so that the triangle sound resonates and decays, the voice-coil moves a few millimeters back and forth 10,000 times, and so does the tweeter’s titanium dome, compressing and rarefying the air molecules at the same rate (10 kHz). These rapid pressure waves travel across the room and reach my ears 10 milliseconds later (sound travels about 1 foot per millisecond–my couch is about 10 feet from my speakers).

Eyes closed, the better to imagine the orchestra spread across the front of my living room, I react by thinking, gee, now that sounds real. It’s just as amazing that my eardrum also vibrates at the same rate and my brain interprets that signal as “triangle”! But that is a subject for the future; for now we’ll stay with drivers.

Silk vs. Polypropylene vs. Titanium/Aluminum
Why titanium and not silk or cloth for the tweeter dome, you might wonder? Isn’t cloth or silk inherently softer than metal, hence better suited to reproduce music? This touches on a common misunderstanding of loudspeaker design, especially of tweeters, by some professional reviewers and lots of enthusiasts. They believe that a hard dome material imparts a “hard” or harsh quality to the sound, or conversely, a “soft-dome” tweeter made of cloth or silk will yield “soft” or “silken” traits to strings and other sounds. This is nonsense, based on lack of knowledge of how a tweeter dome operates.

It is not the material the dome is made of that imparts so-called musical qualities to loudspeaker sound reproduction; it is the linearity or accuracy at which the dome precisely vibrates, without distortion, to recreate the waveform of the triangle that convinces us of a triangle’s sound. The lighter the dome is, the less energy it takes for the voice coil to easily move it back and forth, stopping and starting its travel as the voltage moves between positive and negative cycles. Ideally, a tweeter dome should exhibit perfect pistonic motion during its rapid back-and-forth excursions. The dome must be rigid and not change shape during these rapid fluctuations. Titanium is ideal — light yet rigid–and functions as a heat sink to drain heat away from the tweeter voice coil during loud dynamic swings in the music. If cloth or silk doped with a stiffener were used to shape it into a dome (still used on many speakers) or polypropylene (plastic) material, it might be less rigid and could change shape, especially from overheating, which would alter the accuracy of the reproduced waveform just a little, perhaps enough that the triangle sound might not have that lovely ring. During a recent double blind listening test of a competitor’s speaker, I described the treble and midrange as “shrill” and “screechy.” The tweeter was a cloth-dome design, so if the material made any difference, it should have sounded “soft,” correct?

In fact, it was the jagged and unbalanced frequency response of the competitor’s speaker that made it sound shrill, not the cone or dome materials. Over many years of double-blind listening tests both at Axiom and at the National Research Council in Ottawa, I’ve heard speakers that used a variety of different materials for the tweeter dome. Some cloth or silk dome tweeters exhibited edgy aggressive highs, but when the tests were over, you could quickly spot the jagged, unbalanced treble frequency response in the measured curves that was responsible. Similarly, I’ve praised some speakers that used aluminum and metal-dome tweeters very highly and downgraded others. It’s all about smooth balanced frequency response free of jagged nasty resonances, not about the driver dome or cone materials.

Getting Loud
What happens inside a tweeter when the music gets loud? When a big cymbal crash comes along, a bigger voltage hits the voice coil and it momentarily heats up, but the Axiom titanium dome helps conduct heat away from the voice coil. Moreover, the voice coil is immersed in a bath of magnetic ferrofluid to help move heat away from the vibrating voice coil (ferrofluid has the ability to increase heat transfer from seven to ten times that of air). This is one reason why Axiom tweeters can cleanly reproduce very high-volume sound and cleanly handle dynamic peaks.

For its woofers and midrange cone drivers Axiom uses aluminum because it, like titanium, is lightweight and rigid, so the voice coils can easily move the cone using fewer watts, hence gaining sensitivity and efficiency. Like the tweeter, the midrange and woofer voice coils on Axiom speakers are connected to the aluminum cone, so again the cone works as a heat sink, cooling the voice coil and enabling it to accept higher power levels and play cleanly and loud without problems. The rigid nature of aluminum also helps keep the cone moving as a perfect piston without changing shape, ensuring that the acoustic waveforms of sounds are accurately reproduced.

How It Works
You may be curious about why the voice coil/magnet assembly is termed the “motor” of a loudspeaker. It’s called that because a finely wound coil of wire (the voice coil) surrounds a permanent magnet pole piece but it is separated by a tiny gap. It becomes an electro-magnetic motor when an electrical signal is applied to the voice coil. As the varying audio voltage surges through it moving between positive and negative swings of the waveform, the magnetic properties of the voice coil change and interact with the surrounding permanent magnetic field, causing the voice coil to move back and forth with the varying audio voltage. The voice coil drives the cone or dome to which it’s connected (hence the term “driver”) which moves along with the voice coil, compressing or rarefying the air molecules in front of the dome or cone. And when those pressure waves hit our eardrums, presto, sound!

Woofers
Midrange cone drivers and especially woofers must use much larger magnets, voice coils and cones because they have to move a lot more air to reproduce lower frequencies than tweeters. Bass instruments have long wavelengths; hence the reciprocating woofer cone must generate lots of big pressure waves. That’s also why the woofers consume much of the power (watts) because the large motor assembly needs lots of watts to move the big cone back and forth. This introduces problems of excursion–the distance the voice coil and cone must move to produce loud deep bass. If the voice coil moves too far, it may move out of the magnetic field of the speaker magnet. When that happens, the cone movement becomes non-linear, so it distorts or doesn’t accurately reproduce the audio waveform. One investigator found that a 15% movement of the voice coil outside the magnetic field is equivalent to about 3% distortion.

To ensure accurate translation of the audio electrical signal into deep bass sound waves at higher volume levels, the voice coil can sometimes be made longer so the cone travel (excursion) can be increased, hence the cone can move a greater distance without moving the voice coil outside of the magnetic field. Long excursion woofers may be equipped with dual voice coils, as they are in all of Axiom’s subwoofers. Wired in parallel, these dual voice coils present a lower impedance to the amplifier, letting the amplifier deliver more current and power to the woofer.

There’s much more to good loudspeaker design than I’ve covered here, but this brief tutorial should help you appreciate the amazing accuracy and operation of Axiom loudspeaker drivers.