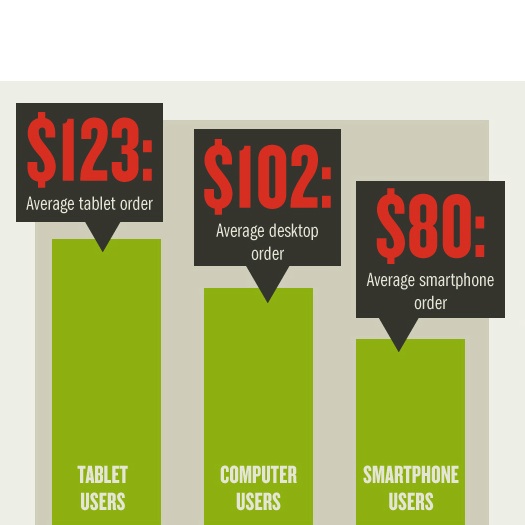 A Miva Merchant report, Ecommerce and Tablet Users on the Rise and accompanying infographic say that tablet use has increased over 300% since last year, and tablet users spend on average $21 more than desktop PC users. According to the report, the average online shopping order from a tablet device is $123, compared to just $102 from a desktop computer. Another recent study by the Online Publishers Association reported that 61% of tablet users have bought some form of digital content online. Furthermore, 30% of tablet users admit to being privy to impulse buys. Tablet users are tech savvy, successful and comfortable with online shopping.

"More than 55 million Americans now own a tablet computing device and that number is expected to rise through 2014," says Jesse Ness at Miva Merchant. "Consumers are more willing to shop online using a tablet device, spend more time online with a tablet device than with a computer, and complete more sales using their mobile devices than they do when they use either a desktop computer or a mobile phone."

See all about the report in the infographic. Click to enlarge

About Miva Merchant
Miva Merchant, located in San Diego, CA is a leading supplier of complete, reliable, expandable and easy-to-use ecommerce software and services to small and medium-sized businesses. Miva Merchant shopping cart software is used by tens of thousands of online merchants and developers on an extensive network of hosting partners and business portals.