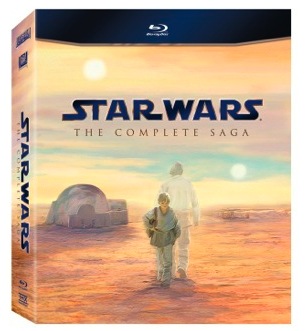 The just released Star Wars: The Complete Saga (Episodes I-VI) on Blu-ray has become the bestselling catalog Blu-ray Disc of all time with one million units sold worldwide in its first week of release, including just over half in the U.S. This represents $84 million in worldwide consumer spend including $38 million in North America — unprecedented for a nine-disc Blu-ray collection at a premium price.

The comprehensive collection includes the six movies with unparalleled high-definition picture and sound quality, and features numerous deleted, extended and alternate scenes, new documentaries and a cross-section of the countless Star Wars spoofs that have appeared in pop culture over the past three decades. Marking the first time ever that the full Saga is available in one complete collection, Star Wars: The Complete Saga on Blu-ray also features a coveted peek into the making of the Saga with vintage documentaries, audio commentaries, behind-the-scenes moments, interviews, prop and costume turnarounds, retrospectives and more.

“Once again our fans’ enthusiasm to celebrate Stars Wars continues to amaze us,” said Kayleen Walters, Senior Director, Marketing, Lucasfilm. “Our goal was to deliver a premium product that they could enjoy with their family and friends and we are thrilled that they are enjoying it as much as we hoped they would.”