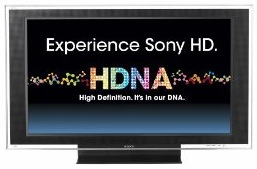 Two-Thirds of US Consumers Own HDTVs; Nearly Half Think Sony HDTVs Highest Quality

A new study from ORC, an Infogroup company, examining US consumer awareness of and usage habits with technologies including high definition television (HDTV) and 3D TV revealed that nearly two-thirds (62%) now have an HDTV in their home, and another 12 percent are looking to purchase one within the next two years. This brings the potential market penetration to nearly three out of four households.

One company that, in theory, should have an easier job is Sony, who emerged far and away as the HDTV brand most synonymous with high quality (43% cited this brand on an unaided basis), trailed by:

“At the recent Consumer Electronics (CES) show in Las Vegas, one of the technologies generating the most buzz was 3D TV for the home,” said Robert Clark, Senior Vice President of ORC’s Technology Market Insights Practice. “The awareness building hurdle for this technology may quickly be overcome in the wake of the latest blockbuster Avatar, along with 3D programming to be offered by ESPN and other networks. In addition, there are numerous blogs and articles now dedicated to the subject,” Clark said. “The net result is awareness levels at fully 60% for a technology that has yet to be advertised and distributed to the mass market.”

Despite high awareness levels, however, only five percent currently have plans to buy a 3D TV within the next two years, posing a potential challenge to marketers.

About ORC
ORC, an Infogroup company, is a leading global market research firm with offices across the U.S., Europe and Asia Pacific region. ORC offers the unique ability to integrate primary and secondary research, competitive intelligence and expert insight to address the business challenges of its clients worldwide. The company has been a partner of CNN on the CNN/Opinion Research Corporation poll since 2006.

About Infogroup
Infogroup (NASDAQ: IUSA) is the leading provider of data and interactive resources that enables targeted sales, effective marketing and insightful research solutions. Our information powers innovative tools and insight for businesses to efficiently reach current and future customers through multiple channels, including the world’s most dominant and powerful Internet search engines and GPS navigation systems.