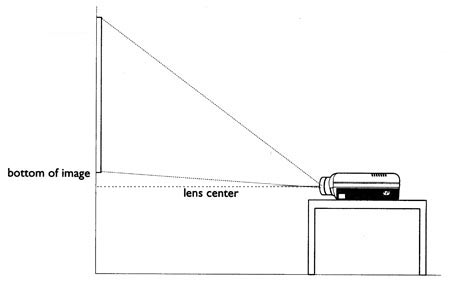 If you plan to use your projector mainly for “event viewing” — movies at night, along with the occasional sports broadcast — the simplest option is to place the projector on a table or other flat surface, and keep it stowed away in a closet or cupboard when you’re not using it. Remember: a projector doesn’t do sound, so to watch a Blu-ray movie, you’ll need to connect your player’s video output to the projector, and run the audio to your A/V receiver. And speaking of sound, if the projector will be located near you, look for a model with a quiet cooling fan.

If you have more of a dedicated home theater in mind (or if you want to keep your projector out of the reach of small children), you can ceiling-mount it. This makes for a neat, uncluttered look, but it does call for some DIY skills. We carry custom ceiling mounts for most of our projectors, so that part is straightforward. But, the projector also needs AC power, plus a video connection from any source you want to feed to it. It’s not a problem for new construction, or if you’re remodeling, but trickier in a finished room (especially if there’s not an attic overhead). Check out our guide to in-wall wiring for installation tips. 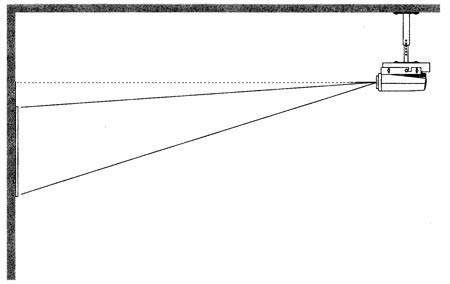 A quick look at installation considerations
As you compare projector features and performance, it’s also a good idea to keep a few installation issues in mind. First, you’ll want to have at least a rough idea of how large an image you want to project, because that will affect the distance between the projector and your screen. With any projector, the further you position it from your screen, the bigger the image will be. But different projectors have different “throw ratios.” The throw ratio is the relationship between a projector’s distance from the screen and the width of the image. A projector with a “short-throw” lens projects a larger image for a given distance from the screen, so it’s a smart choice for smaller rooms where the projector is placed relatively close to the screen. Long-throw projectors are good for ceiling-mount situations where the projector will be placed further back in the room, behind the viewing position.

Fortunately, there are two ways to fix picture shape: lens shift and keystone correction. Lens shift lets you tweak the position of the lens inside the projector, so you can compensate for your projector being slightly off-axis. Keystone correction, on the other hand, adjusts the image’s shape using internal processing that can slightly degrade the quality of the image. Nearly all projectors offer keystone correction, but only some offer lens shift. So if you’d like a little installation flexibility, especially if you plan on ceiling-mounting your projector, consider a model that offers lens shift so you can adjust the shape of the image without affecting its quality.

Finally, wherever you end up placing your projector, be sure to leave plenty of space around it to ensure proper ventilation.

A few words about screens — choosing size and type
Because it contains none of the electronics, a projection screen can be literally paper-thin. Whether your screen is free-standing, mounted to the wall, or retractable from the ceiling, it will save considerable floor space compared to a large, free-standing TV. When it comes to screen size, many people feel that bigger is automatically better. But that’s not always the case. Projecting too large an image may produce a picture with less than optimum brightness, or noticeable pixel structure.

The size of the image also determines how far you should sit from the screen for optimum viewing. For an HD-capable projector, the general rule of thumb for viewing distance is 1-1/2 times the screen diagonal — so if your screen’s diagonal measurement is 96″ (8 feet), you would want to sit about 12 feet from the screen. Of course, viewing distance is highly subjective. After all, in a movie theater, folks naturally spread out from the front row to the back, and everywhere in between.

It’s a good idea to purchase your projector before you purchase a screen — especially if this is your first experience with a front projector. Install your projector first, do some viewing just using a wall, and then decide which screen size and type best fit your needs.

The screen shot on the left shows how a projector with a native 16:9 imager displays a 4:3 image. On the right, a 16:9 image as displayed by an older 4:3 native projector.

All of our projectors can display both 4:3 and widescreen 16:9 material. All use an imaging device with a 16:9 “native aspect ratio,” which means that all pixels display when showing widescreen signals, but showing 4:3 material causes pixels on the sides to shut off, so you’ll see vertical black bars on each side. See our article about aspect ratio for more info.