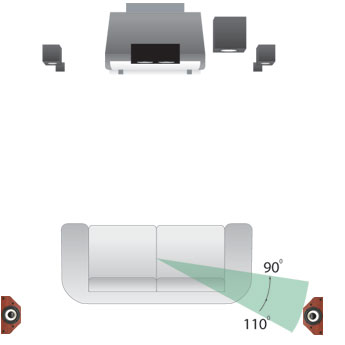 The fundamental reason for side placement of surround speakers, aside from the fact that Dolby Labs advise it, is that the 5.1-channel soundtracks for movies are mixed with the surround speakers above ear level at each side of the mixing theater or studio, just like in large movie theaters. Since in our home theaters or media rooms we are trying to replicate or mimic the acoustic soundfield that we experience in a cinema, and hear what the sound engineers and the director heard when they panned and mixed the directional effects for motion pictures, it’s clear enough that surround speakers properly belong on each side wall of your home theater, above ear level.

Interestingly, however, there are solid acoustical reasons for this (and psycho-acoustical data to support it). Our ears are at each side of our head, not on top or at the back, and the pinna-the shell-like cartilage external ear-is focused forward, the better to collect lateral reflections from the sides and direct sounds arriving from the front. The brain measures the timing and amplitude differences in the sounds arriving at the left and right ears and determines the direction and location of the sound source. Any sound other than front dead center has to travel farther around your head to arrive at the other ear, so it arrives a few milliseconds later.

What’s more, it turns out that our hearing is especially sensitive to these lateral timing and amplitude (signal strength) differences. In fact, research on concert-hall design has shown that it is largely the lateral-arriving sounds reflected from the sides of a space that tell our brain how big a space we are in. While sounds reflected from above and the back wall aren’t entirely wasted and do contribute, it is the arrival time and amplitude differences of the side-wall reflections that are crucial elements in giving us a sense of the acoustic space, its size, and reverberant character.

Some of this research came to light in the 1960s when orchestras and their governing boards pressured architects and acousticians to increase the size of concert halls by pushing out the sides of the hall in a fan shape, the better to accommodate more seats, wider aisles, generate more money, and bolster the salaries and retirement funds of the musicians. Sadly, the resulting halls turned into acoustic nightmares. Regular concertgoers, deprived of those important lateral reflections (the fan shape prevents side-wall reflections from reaching concertgoers’ ears) found the acoustics of these new, bigger, fan-shaped spaces “dry” or “dead,” “2-dimensional” or worse. Attendance declined and in the case of many big-city orchestras (Toronto, New York, San Francisco), entire halls were eventually gutted and re-built, with great attention paid to retaining the classic rectangular shoebox shape or some variation thereof. In most cases, the result was greatly improved acoustics and satisfied patrons.

The lesson in all this is to try and locate your surround speakers at the sides of the listening area, somewhere within that magic angle of from 90 to 110 degrees (to the front speakers) firing across the room and a bit above your ear level, if possible. With Dolby Digital 5.1-channel movie soundtracks of all varieties, and even with lots of multichannel music or CD material processed through Dolby Pro LogicII(x), you’ll experience the optimal mix of direct and reflected ambient sound. And, as many system owners have noted, the generous dispersion of Axiom’s quadpolar multi-directional QS8 and QS4 surrounds allow considerable leeway in placement.