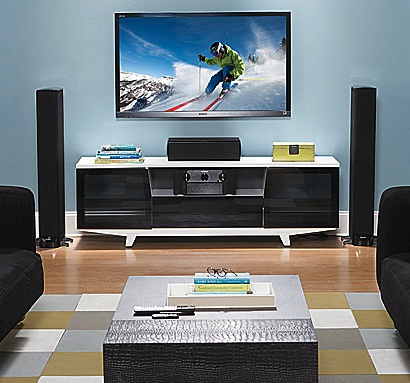 Black Friday sales offer some of the best deals of the year for audio-video shoppers. While genuine mark-downs and bargains are out there, here are some caveats on shopping wisely for home theater gear, whether it’s a big flat-screen TV to replace that obsolete “picture-tube” TV or a home theater multi-channel surround sound system.

LCD or Plasma?
Sales volume and off-shore manufacturing have reduced the prices of flat-screen LCD and plasma TVs to a fraction of what they cost five years ago. Now is an excellent time to shop for a nice, thin flat-screen set, as further dramatic price reductions are unlikely. Which type to get?

Both LCD and plasma technologies are capable of excellent performance but there are differences. If viewing angle from the side of a room is important, then a plasma flat screen is the set to get. Plasma screens maintain their color values and excellent contrast even at extreme angles. All LCD flat screens lose some contrast and color richness as the viewing angle from the side becomes more extreme. If the room you are putting the set in is brightly lit with lots of windows, LCD sets will go extremely bright, although for ideal picture quality that isn’t recommended. LCD sets used to have so-so contrast and blacks, but new sets with LED illumination and “local dimming” have eliminated that problem. Plasma sets generally use more energy than LCD panels but new models from Panasonic have reduced energy consumption significantly.

Biggest Isn’t Always Better: Match screen size to viewing distance
Putting a giant 63-inch diagonal or larger flat-screen TV into your living room may seem amazing at first, but consider the viewing distance. A too-big screen may overpower a modest living room and degrade the image quality of viewing non-HD video such as standard DVDs or programs that aren’t in High Definition (and there are lots of those). To keep things simple, a minimum viewing distance of twice the diagonal screen size for HDTV sources–about 8 feet back from a 50-inch diagonal screen–is a good basic rule. Bigger screens always cost more and use more energy, so if a 50-inch flat-screen plasma or LCD TV is “just right” for your room and seating distance, save some bucks by getting the smaller display. If you plan on a dedicated home theater in the basement, consider a video projector: prices of 720p models (it is still High Definition) start at well under $1000. The Blu-ray “1080p” standard does add sharpness to big-screen images and those projectors cost somewhat more. Keep in mind, however, that all HDTV broadcasts are 720p or 1080i, roughly equivalent in image detail.

Don’t Confuse “Sound Bars” with Real Home Theater Surround Sound
It’s a nice idea to think that a single longish box under or above your new TV will somehow recreate five-channel home theater surround, but so-called “sound bars” involve major compromises in surround sound immersion and effects and will not deliver a convincing or satisfying home theater experience. Impressive home theater surround sound requires five separate loudspeakers–three at the front (left, center, and right) and two surround speakers at the sides or rear of your room, plus a subwoofer for ultra-deep bass. Dolby Labs knows a thing or two about home theater sound, given they set the worldwide standard in cinema sound and were chosen as the North American broadcast standard for HDTV soundtracks. Trying to get 5.1 channels from a single box defies physics, so look at high-quality speaker manufacturers for true high-fidelity surround sound.

Brand Names or Off-Brands?
While a few years ago I would have warned about getting so-called “house brands,” recent reviews by a well-known consumer testing organization point to improved performance from some of those brands. I still find the best-looking HD images on sets from Samsung, Panasonic, LG and Sony, however brands like Vizio and Insignia can’t be ignored.

3D is still a gimmicky and annoying technology, much like it was in movie theaters in the 1950s because of the uncomfortable glasses, dim images, and odd visual artifacts and distortions caused by the glasses. In my opinion–and you make think otherwise—apart from the gee-whiz effects at first viewing (and those are real and compelling), 3D adds little or nothing to the impact and story line of a good movie. The 3D sets cost a lot more than standard flat-panel HD sets and some viewers, including this writer, find eyestrain and headaches may result from longer viewing, especially if you already wear corrective lenses or glasses. But if you’re dazzled by the 3D effect and must have it, recent tests show plasma panels produce better 3D images over wider viewing angles than do LCD flat screens.

Hi-Fi for College Kids
Manufacturers of authentic hi-fi speakers and home theaters were crying the blues at the proliferation of legions of iPod listeners who use crummy-sounding earbuds instead of good loudspeakers to enjoy music at home. However, there is a growing consensus that as the iPodders age, marry and settle down, off come the earbuds with good loudspeakers getting renewed interest. You can help your kids support fine hi-fi music reproduction by getting them a pair of good bookshelf speakers for their college dorms. Once they hear wide-range natural music over great speakers, they’ll never go back to the earbuds, which of course are a socially isolating way to enjoy music. Excellent hi-fi bookshelf speakers start around $300 per pair from Axiom Audio.

Don’t Jump at the First Theater-in-a-Box or “Cute” Speaker Bargain
Sometimes the very low pricing of Home-Theater-in-a-Box (HTIB) all-in-one systems can be very attractive, but significant compromises exist in order to sell the systems for prices in the several-hundred-dollar range. If you want real hi-fi surround-sound home theater and lasting satisfaction, the “bargain” value of a HTIB system may turn out to be hollow over the longer term. Likewise, don’t expect cute tiny speakers to fill family rooms or living rooms with powerful home theater sound, no matter what the claims. Filling family rooms with wide-range thrilling sound quality is the profession of companies and engineers who specialize in such components, and they know that moving all that air in a room requires larger, carefully engineered speakers and electronics.