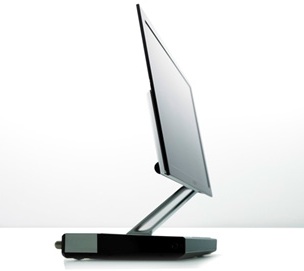 Thinner and Thinner
Thin was in (isn’t it always?), and Sharp, Sony and Samsung showed flat, ultra-thin displays less than 1 inch thick, some only a few millimeters in depth. Sony’s knockout OLED (Organic Light Emitting Diode) sets were back again this year, in an 11-inch diagonal screen and this year with a price attached: $2,500. Stunning image quality but in that screen size (11 inches diagonal) even conventional LCD hi-def images look ultra-sharp. Still, there are suggestions that OLED technology may become affordable and practical in larger screen sizes by 2012.

Last But Not Least, 3-D Video!
It seems that each year the CES brings yet another demo of three-dimensional (3-D) video processing. In past years, such demos have been deeply flawed, with flickering images, clumsy uncomfortable glasses, and images that are dim and low contrast.

Guess what? This year, I viewed a Samsung demo of 3-D video that was remarkably good. True, you still had to don glasses, which weren’t as annoying as those in the past, but the 3-D effects were terrific and there was no flickering of the image or poor contrast. The source material was a game system, and I bet that Samsung’s new line of plasma panel displays that are 3-D compatible could become hugely popular with gamers. (The process won’t work with LCD screens because the pixels don’t turn on and off fast enough.) The accessory processor is modestly priced and of course you do have to get source material that’s been programmed to work with the system.