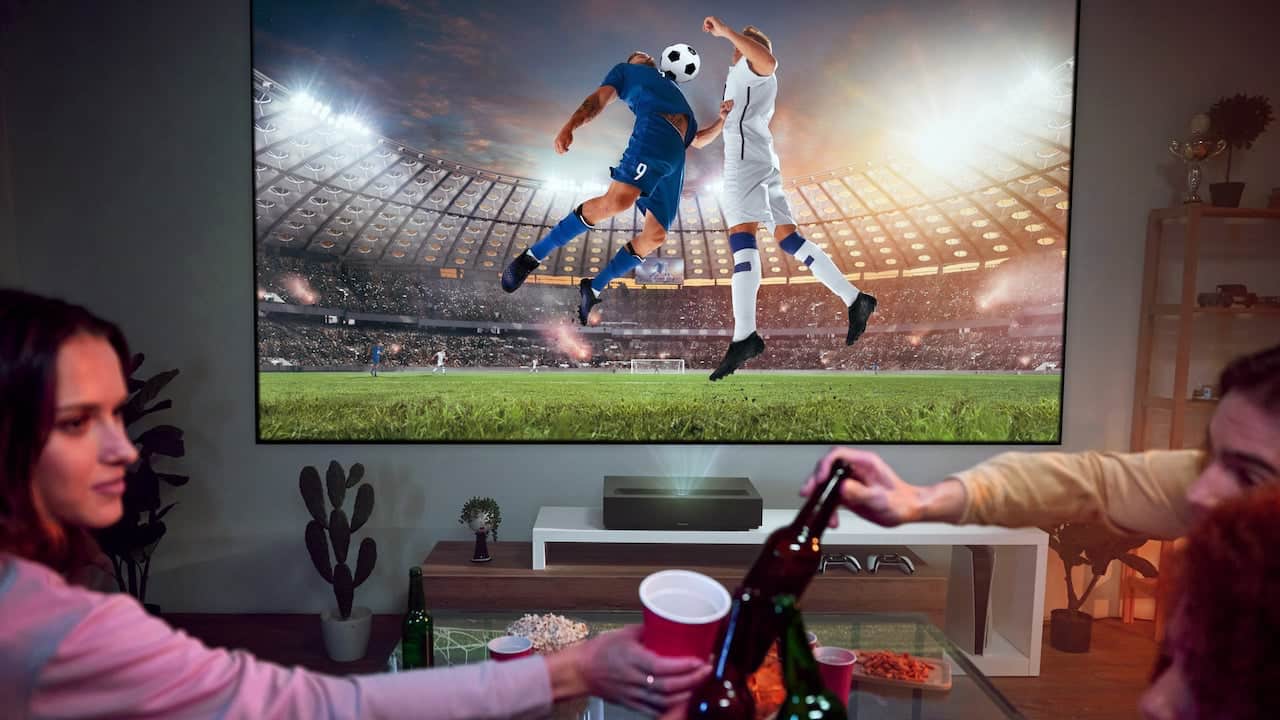 UST (Ultra Short Throw) projectors are gaining in popularity as consumers seek larger TV screen sizes at affordable prices. If you’re not sure what a UST projector is or if it’s right for you, check out “WTF is a UST Projector?” For those already sold on the concept and in the market for a UST projector for your living room or home theater, here are our current recommendations of the current best UST projectors.

The Formovie Theater was a dark horse contender in the recent “Laser TV Showdown” hosted by Projector Central and ProjectorScreen.com. It ended up with the highest score in the Tri-Laser competition due to its strong picture performance and rich feature set. This win was all the more surprising as the Formovie projector was one of the most affordable in the competition ($3,499 MSRP, street price of $2,999).

Made by Fengmi, the Formovie Theater is a 4K UST projector powered by a 3-laser DLP light engine. It offers a brightness rating of 2,800 Lumens and it can fill a screen up to 150 inches diagonally. The projector offers excellent color accuracy (particularly after calibration) and is rated to reproduce 107% of the BT.2020 color gamut. The Theater supports HDR10 high dynamic range (of course) but also includes Dolby Vision compatibility, which is rare in the projector market. This means Dolby Vision-encoded Ultra HD Blu-ray Discs and 4K UHD streaming content look particularly impressive on the Formovie.

As far as picture performance goes, the Formovie projector is extremely highly rated for contrast, color accuracy and motion reproduction. It also excels at HDR tone mapping, which is the ability to map high dynamic range content to the specific luminance capabilities of the display. This is particularly important on a projector which normally has less dynamic range available than you’d find on a flat panel OLED or LED/LCD TV.

The Formovie Theater is also no slouch in the audio department as the unit includes a built-in 2.1-channel powered sound system that was designed in partnership with high-end British speaker maker Bowers and Wilkins. The unit even supports Dolby Atmos, though we’d recommend pairing it with a stand-alone Dolby Atmos surround sound system for best results.

If it is streaming apps you crave, you’ll find a large selection of those as the Formovie Theater is built on the Android TV 11.0 platform, which gives you access to the Google Play Store. We’ve heard that the Netflix app is problematic on this projector (as you can read in Engadget’s review) but we assume the company will work this out. If not, Netflix customers may need to connect a separate 4K streaming stick.

About the only things lacking on the Formovie Theater are its lack of 3D support and its relatively high input lag (41.9 ms). 3D support is only relevant if you have a library of 3D movies on Blu-ray Disc and still enjoy that kind of thing. Input lag only matters if you plan to do hardcore gaming on the projector. While 41.9 ms lag is not great, it’s actually better than many competitive UST models. The best input lag scores we’ve seen so far on USTs are about 20 ms (Epson LS800), while the worst scores on otherwise high performance UST projectors can actually be up around 69 ms.

Where to Buy the ForMovie Theater UST Projector:

OK, $6,499 is more than a few dollars more than the ForMovie Theater’s $2999 street price, but the LG HU915QB is another excellent performer in the UST projection category. It placed second in the Laser TV Showdown for Triple Laser projectors and first overall in the 2022 UST Projector Shootout.

The LG HU915QB offers outstanding shadow detail, contrast, color accuracy and color saturation, plus it includes excellent tone mapping for HDR content. It includes Texas Instruments larger 0.66″ chip with native 2716×1528 resolution, which means it only has to do a single pixel shift for full 4K resolution. Most other DLP UST projectors use the smaller 0.47″ 1080p DLP chip which requires 4X pixel shift for 4K resolution. The HU915QB also performs well in bright rooms with peak brightness of 3,000 ANSI Lumens.

At the same street price as the Formovie Theater ($2,999.99) the BenQ V7050i is also a strong performer, with the added advantage of 3D support (with optional active shutter glasses). The V7050i is also a 4K DLP projector but it includes a single laser (plus phosphor) for lighting instead of the Formovie’s triple laser design. The V7050i took top honors in the UST projector showdown’s “Single Laser” category and actually got a slightly higher overall score than the Formovie Theater (they were within a few hundredths of a point).

The V7050i’s peak brightness is a bit lower than the Formovie at 2500 Peak Lumens. Even so, the BenQ scored highly in the UST Showdown on brightness and contrast tests. It also was highly rated for color accuracy, skin tone reproduction and motion reproduction. Like the Formovie projector, the BenQ didn’t have a great motion lag score. In fact, it was near the bottom of the pack at 69.1 ms of lag time. Again, If you’re not into gaming, this spec isn’t relevant, but if you do FPS (First Person Shooters) on the big screen like a boss, you may want to consider the Epson LS800 (more on that below).

Similar to the Formovie, the BenQ projector has Android TV on board, with access to the Android Play Store. It also has a dedicated Amazon Prime Video button right on the remote control. The sound quality of the BenQ projector’s built-in speakers is a bit lacking, compared to some of the competition, but this can be remedied with a good sound bar, or better yet, a component-based Dolby Atmos surround sound system.

Where to Buy the BenQ V7050i UST Projector:

Epson’s latest entry to the UST projector market, the LS800 was released after this year’s UST competition, but initial reviews look good and the Epson has some unique features to offer. I’ve spent some quality time with this projector and found a lot to like. First up, it has one of the highest brightness ratings of any UST with both color and white brightness rated at 4,000 ANSI Lumens. This makes it an excellent choice for bright living rooms and it gives the projector plenty of peak luminance for 4K/HDR content. It also features a low input lag of about 20ms and excellent motion resolution making it a great choice for gamers.

PC Mag’s M. David Stone recently published his review of the LS800 and rated the performance “excellent” overall, highlighting its brightness, good color accuracy and low input lag. He also praised the unit’s sound quality, thanks to Epson’s exclusive partnership with Yamaha. The projector can even double as a Bluetooth speaker for those times when you want to just chill to the music without the distractions of a massive screen. The LS800 has one of the shortest throw requirements of any UST projector: it can create a 150-inch diagonal image from less than 12 inches away from the wall.

The only drawbacks of the Epson LS800 are the lack of 3D support and the fact that its version of “pixel shifting” doesn’t capture full 4K detail. It does support 4K UHD input sources and renders them at twice the resolution of 1080p (but only half the resolution of true 4K). On most content, the superior brightness and contrast ratio of the Epson projector will more than make up for this lower resolution, but we want to make sure our readers know what they’re getting.

When the Hisense competed in the Showdown, the list price of the 100-inch projector/screen bundle was $3,999.99. The projector placed second overall in the single laser competition, just behind the BenQ. But now that price has been lowered by $1,500 to $2,499, including the screen. When you consider that an ALR screen for UST projectors normally sells for $1,000 or more, this bundle is hard to resist. The 120-inch version was also reduced by $1,500 to $2,999.99.

The Hisense projector got the top scores in the single laser category UST Showdown for color gamut, tone mapping, UHD Detail and color accuracy in SDR mode. It was neck and neck in the scoring with the top-ranked BenQ projector, but this one now has a much lower price tag. The Hisense 100L5G is rated at a respectable 2700 ANSI Lumens of peak brightness and offers a fairly average input lag of 41.8 ms (just about the same as the Formovie’s input lag). Sadly for 3D fans, there is no 3D support on this Hisense model. I’m sure the three remaining 3D fans out there (of which I am one) are wailing and bemoaning their cruel fate right about now. Or not.

Like the other UST projectors mentioned, the Hisense L5G includes Android TV on board, giving you access to the Google Play Store with hundreds of video, gaming and audio streaming apps such as Netflix, YouTube TV, Amazon Prime Video, HBO and more. The Hisense remote even includes a microphone with voice control. Whether you use Google Home or Amazon Alexa, the L5G is compatible with both platforms for full smart home integration. You can also ask Google about the weather, traffic or what’s on CBS tonight. Google won’t mind. She likes the attention. 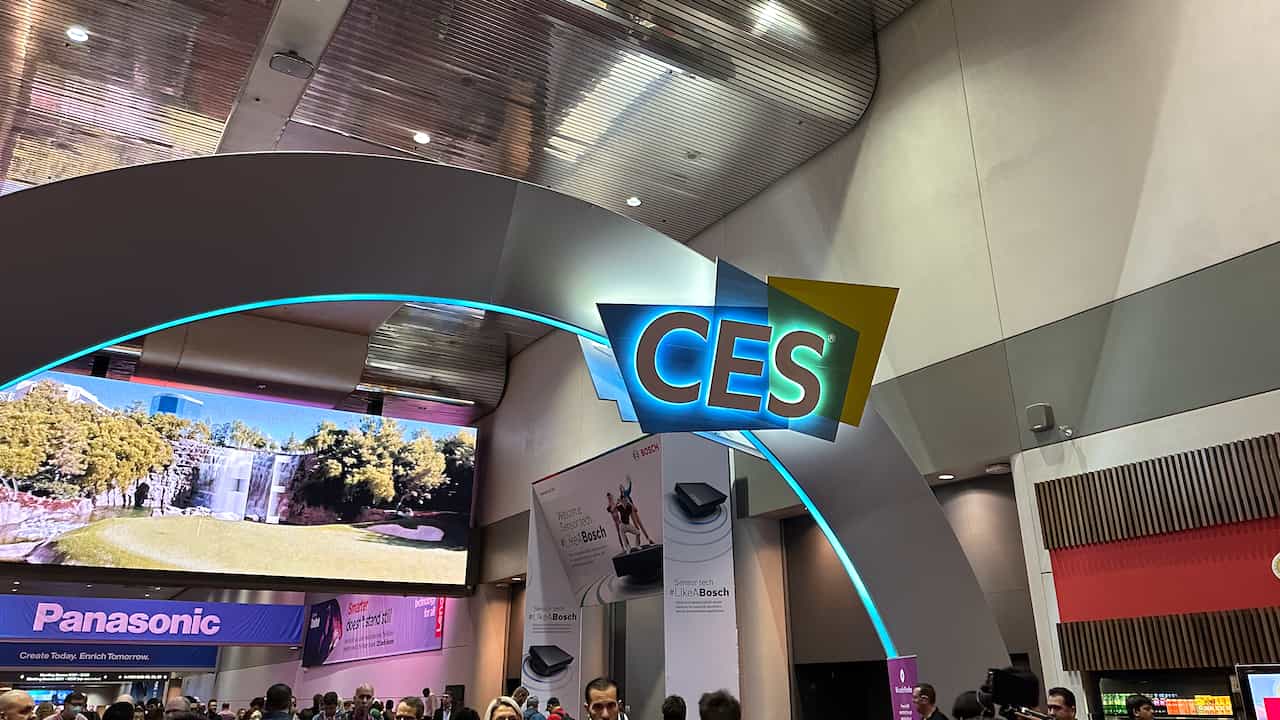 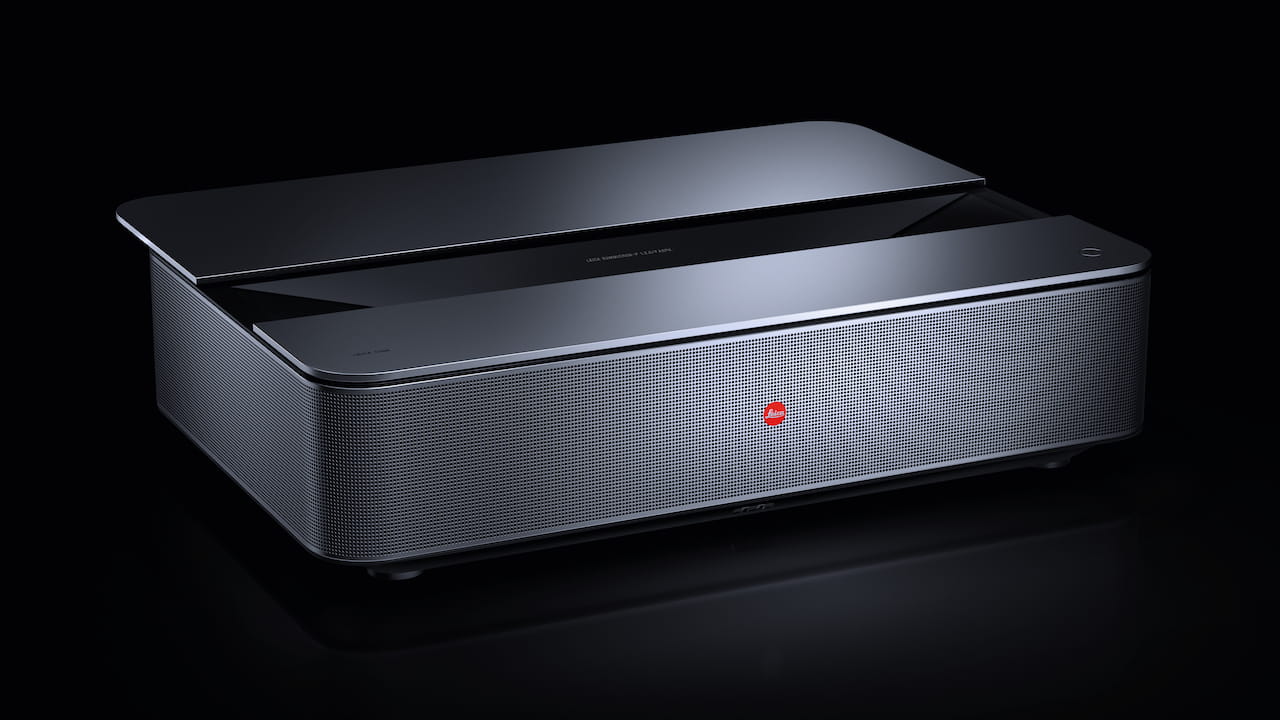 Leica has partnered with Hisense to introduce its first-ever TV product, an ultra-short throw projector (Laser TV) called the Cine 1 in 100-inch or... 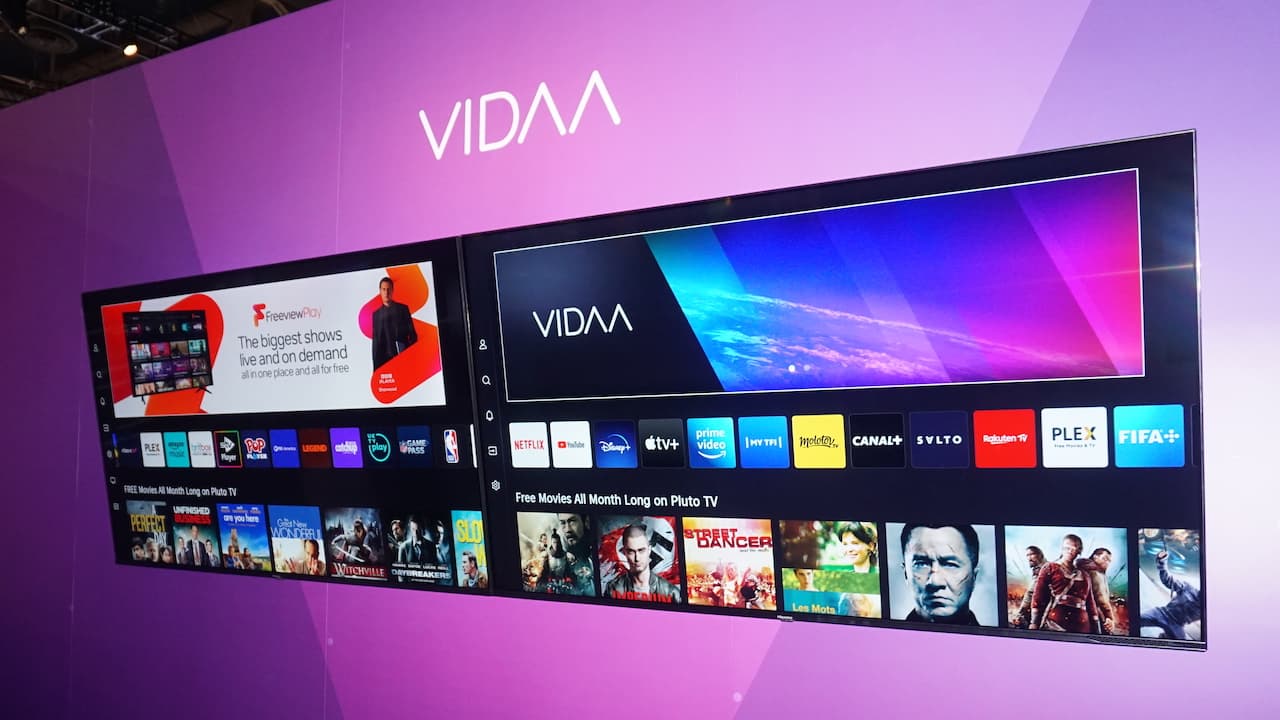 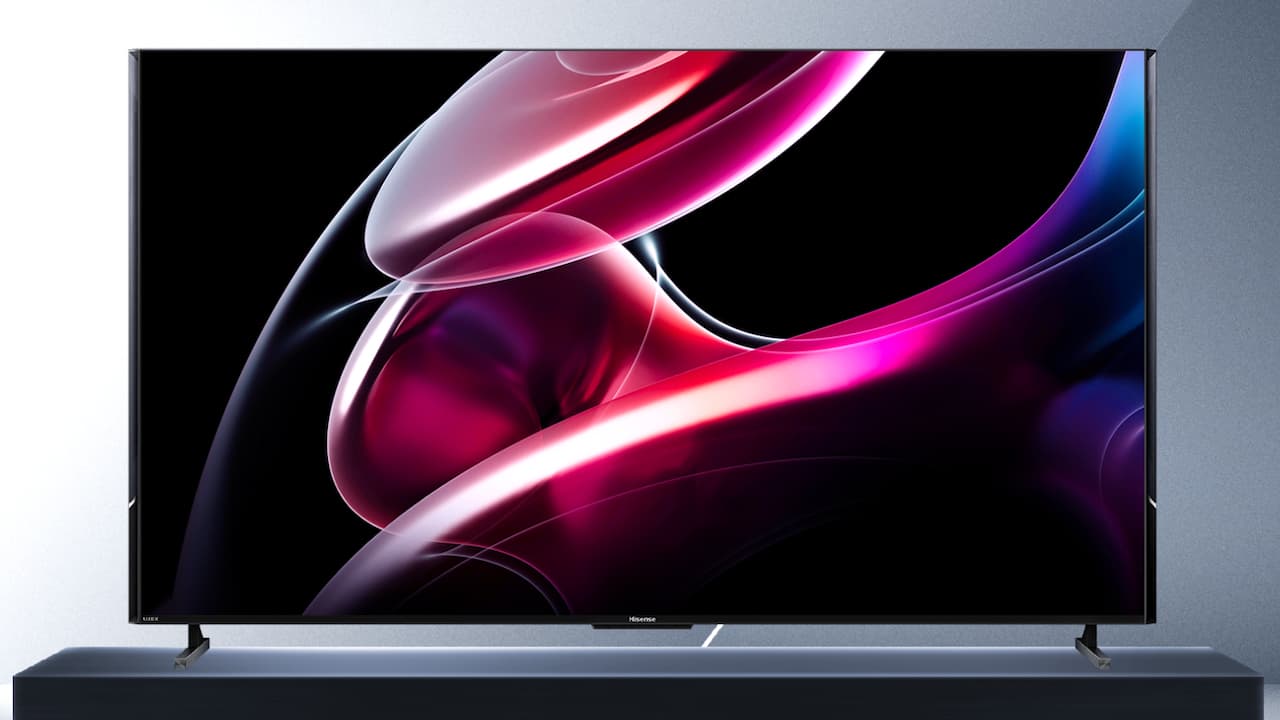 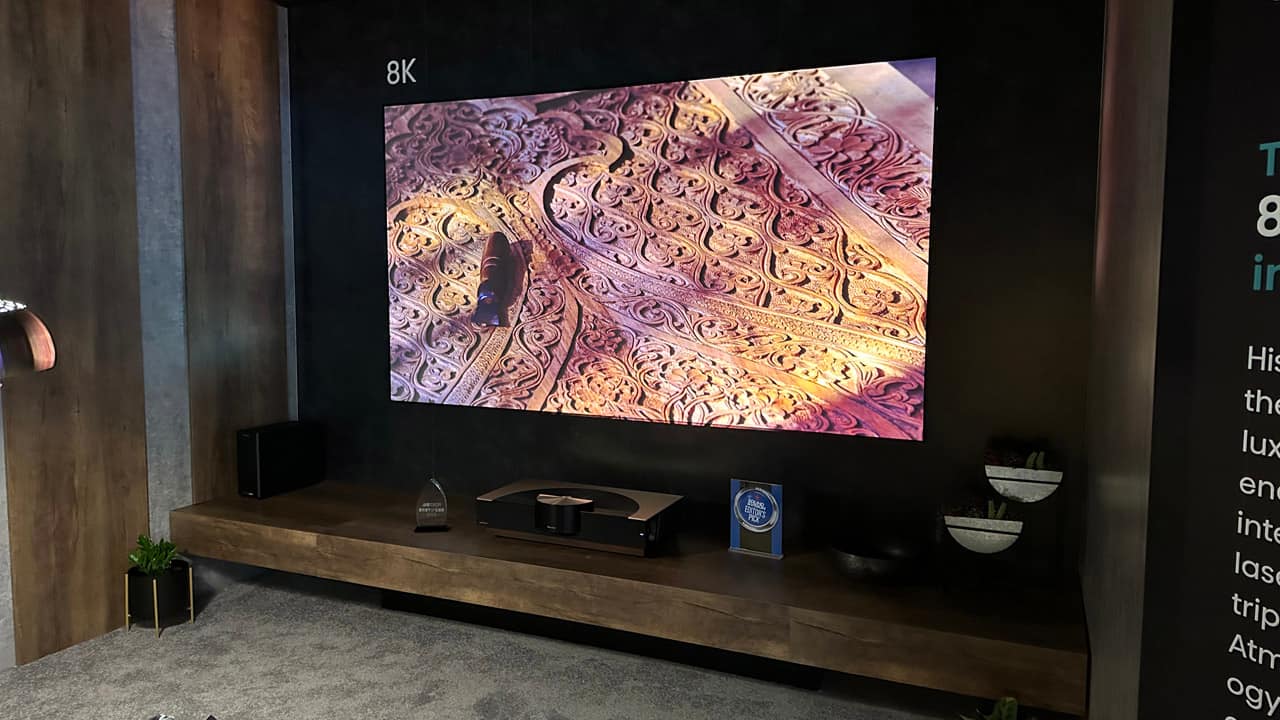 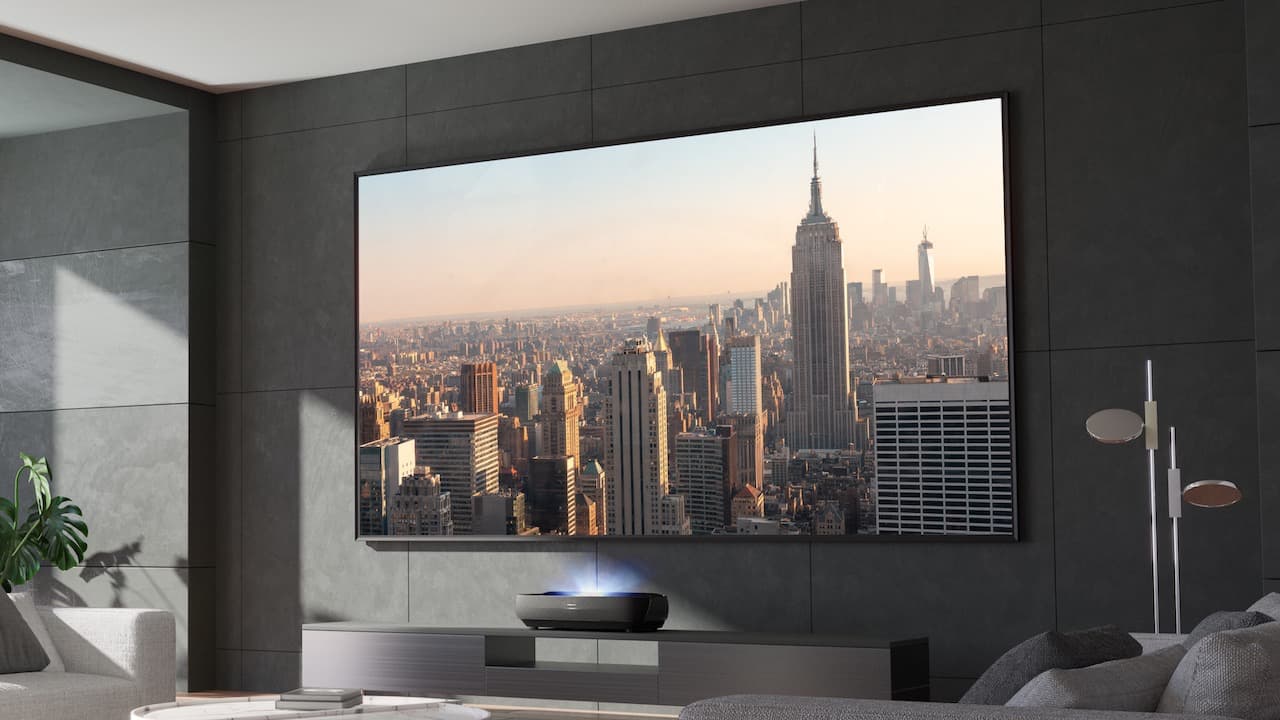 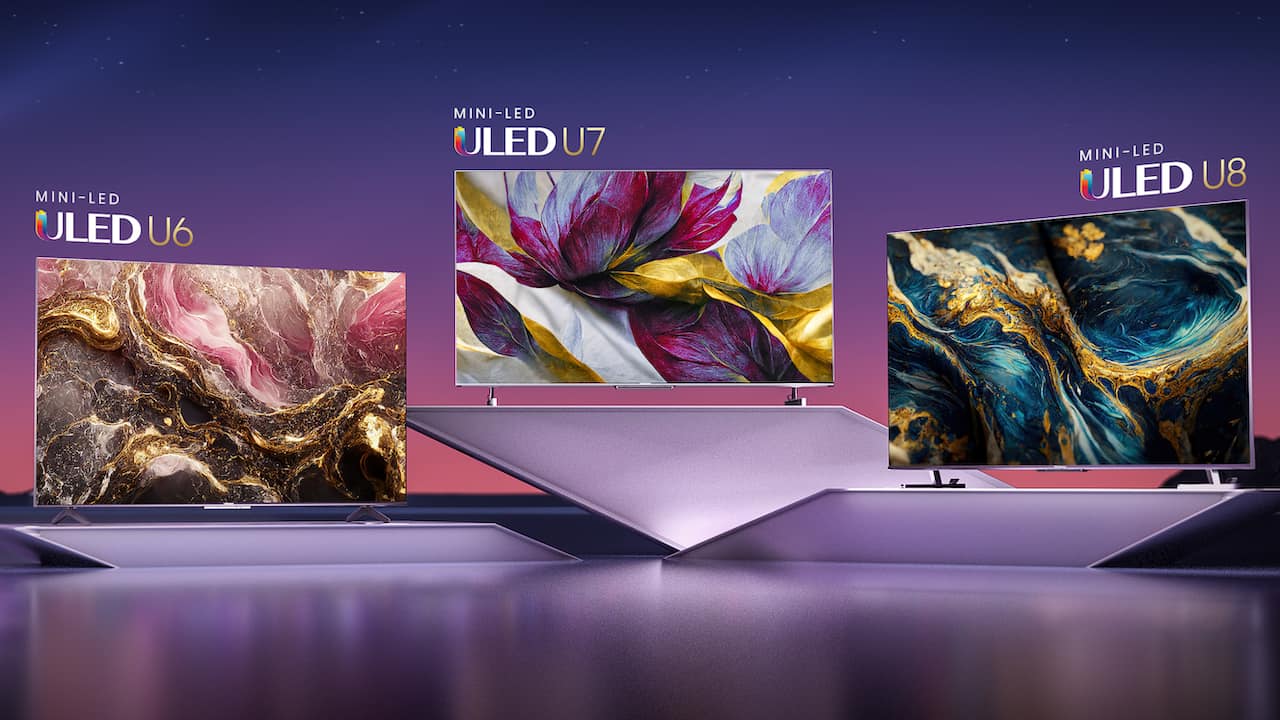 Hisense brought a truckload of impressive ULED 4K TVs to CES 2023 and the brand is now #2 worldwide. 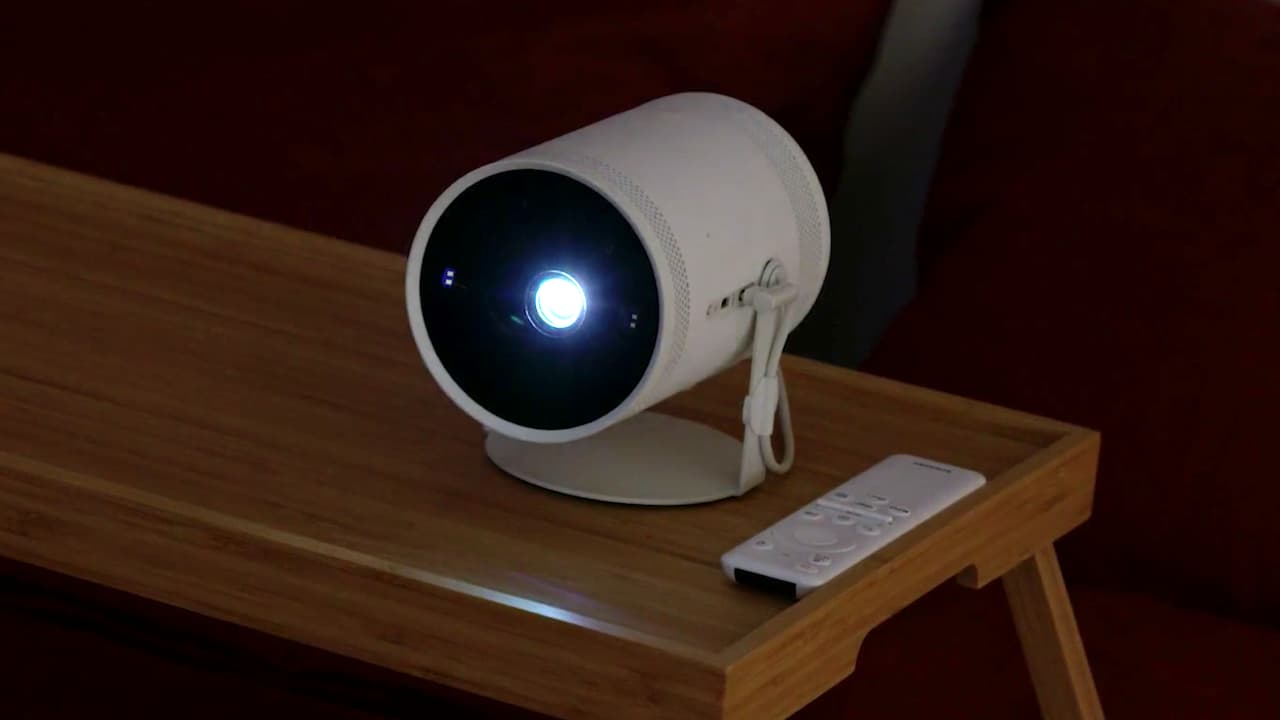 CES 2023: Samsung Doubles Down on The Premiere 8K and Freestyle Projectors

Samsung is introducing the world's first 8K ultra-short throw projector in 2023 along with a versatile portable projector ready for the metaverse.